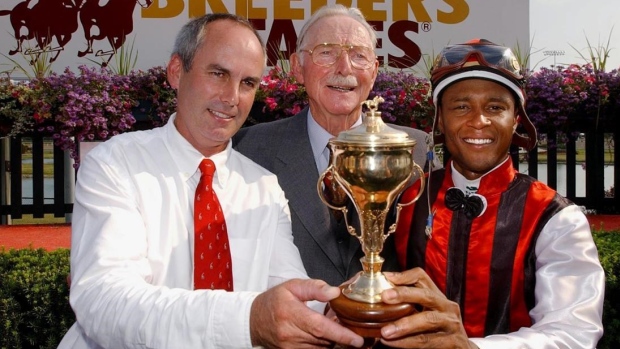 TORONTO — Mike Keogh finds himself in a similar position to the surviving members of the 1972 Miami Dolphins.

Miami remains the NFL's last unbeaten team, capping a perfect 17-0 run by downing Washington 14-7 in the Super Bowl. There've been reports over the years that whenever the league's last undefeated teams lose, some of the Dolphins' surviving members gather to toast the continuation of their record.

In 2003, the Keogh-trained colt Wando captured the Canadian Triple Crown with a 1 1/2-length victory in the $400,000 Breeders' Stakes with Patrick Husbands aboard. No horse has accomplished the feat since.

On Oct. 24, Mighty Heart will have an opportunity to become just the eighth Canadian-bred horse — and first since Wando — to record the elusive sweep. Trainer Josie Carroll said earlier this week her one-eyed colt is being pointed towards the Breeders' Stakes at Woodbine Racetrack in Toronto after winning the Queen's Plate and Prince of Wales Stakes within a 17-day span.

"He's an easy horse to cheer for," the amiable Keogh said in a telephone interview. "I love the story, the owner-breeder is a small operation and I love to see that.

"But obviously, it would be bitter-sweet as well. You'd still like Wando to be the last Triple Crown winner. I'd be lying if I didn't say that."

However, the veteran Woodbine trainer also understands the tremendous lift a Triple Crown win would provide Canada's horse-racing community during a global pandemic — especially one delivered by a horse that lost an eye as a foal in a paddock accident, then burst on to the scene in 2020 with a wire-to-wire, 7 1/2-length win in the Plate as a 13-1 long shot at Woodbine.

For good measure, Mighty Heart came from third off the final turn at the Prince of Wales on Sept. 29 for another impressive win, this time as the 6-5 race favourite in Fort Erie, Ont.

"He was on the lead in the Plate and rated in the Prince of Wales so he looks like he's pretty easy to handle in a race," Keogh said. "If there was a lot of speed in the Breeders' he could sit off it and if there was no speed he could go to the lead.

"He looks like he's a very quality horse . . . he's certainly improving with every race."

The Prince of Wales victory was Mighty Heart's third in four races. Overall, he has three wins and a third-place finish in six career starts, all coming this year, for $688,003 in earnings.

Carroll is in a 25-day window to prepare Mighty Heart for the Breeders' Stakes, a 1 1/2-mile turf race. After Wando's win at Fort Erie, Keogh's goal was to keep his horse happy and rested.

"After the Prince of Wales, I didn't do a whole lot with him," Keogh said. "Freshness is the main thing because it's a tough campaign."

The Canadian Triple Crown is a true test for a horse. Not only do the races vary in length, they're run on different surfaces (Tapeta, dirt and grass).

Unfortunately for Keogh, two key figures in the '03 Triple Crown run have departed.

Wando was retired to stand stud in '05 and died in January 2014. The horse won 11 of 23 races and earned $2.6 million before being inducted into Canadian Horse Racing Hall of Fame in 2014.

Gus Schickedanz, who bred and owned Wando, died in June 2019 at the age of 90. He was enshrined in the Canadian Horse Racing Hall of Fame in 2009.

"I miss them both terribly," said Keogh, who was named for induction into the Canadian Horse Racing Hall of Fame earlier this year.

Keogh, who grew up in Epsom, England, said Wando always had a pleasant demeanour and was an easy horse to train. That is, once he left his stall.

"He was very claustrophobic," Keogh said. "He didn't like being in his stall so we tried to keep him out as much as we could."

In 2003, Keogh trained both Wando and stablemate Mobil and said the two were polar opposites.

"Wando was an absolute gentleman," Keogh said. "Mobil was like the kind of guy you'd want behind you in a pub if you got into a punch-up.

"He'd be right there beating them all up. But Wando, he'd be there chatting up the ladies."

While chasing a Triple Crown was exciting, Keogh said it was also very nerve-racking.

"The most nervous I've ever been in my life was when they were loading into the gate on that final leg," said Keogh. "I've always been a typically nervous person but Wando had such a big following and it was a lot of pressure.

"After the race it was really nice to let all the steam off."

Like Wando, Mighty Heart has earned plenty of fans.

"So many people have fallen in love with this horse from the start of the Triple Crown," Mighty Heart's owner-breeder Lawrence Cordes said after the Prince of Wales. "It makes my heart feel so good that so many people are excited."

Weather may be a factor in the Breeders' Stakes as a lot of rain could make for a softer turf course.

"The thing with us over here is we hardly get to run on a soft turf course," Keogh said. "So we don't know if our horses can handle it."

Once again there will be no spectators at Woodbine for the Breeders' Stakes — no fans attended the Plate or Prince of Wales due to the COVID-19 pandemic. But Keogh, for one, will be watching Mighty Heart's Triple Crown quest.