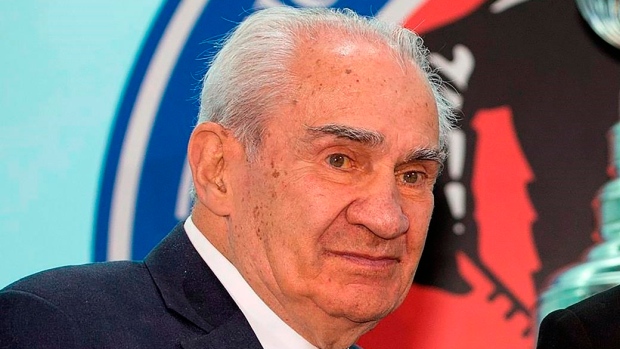 TORONTO — After a decade as the NHL’s only trophy without a face, the General Manager of the Year award now has a new name.

The NHL announced that the honour will now be known as the Jim Gregory General Manager of the Year Award, as unanimously approved by the league’s 31 current managers at their annual meeting on Tuesday.

“This is a terrific tribute to a wonderful man by a group uniquely qualified to appreciate his many contributions to our game,” NHL commissioner Gary Bettman said in statement. “During his tenure as general manager of the Toronto Maple Leafs, Jim Gregory transformed the art of team-building. Through the many years he spent at the league, our general managers regularly sought his counsel. They universally revere his lifetime of service to the NHL.”

The award, which was first presented in 2010, certainly could have originally been named after Sam Pollock, the nine-time Stanley Cup-winning manager in Montreal.

But Gregory’s towering presence as one of the game’s great gentlemen and true innovators made for a fitting recognition. His impact was tremendous.

“It’s very well deserved and a fitting name for the GM of the Year,” said 2016 winner and recent Hall of Fame inductee Jim Rutherford.

For more about Gregory’s incredible life and career, please read his obituary here.

No precedent for Hathaway spitting

“I think it’s an emotional reaction to a player that got caught up in it and had a couple guys coming after him,” MacLellan said. “He reacted admittedly the wrong way. We’ll see what happens from here. I think he learned from it and it won’t happen again.”

Hathaway will have a hearing with NHL executive senior vice-president of hockey operations Colin Campbell on Wednesday. The NHL is in a bit of a pickle because while there is mention of spitting in rule book, there is no defined discipline.

Hathaway faces a possible suspension and/or fine for spitting. Campbell said the context – that Hathaway just received a sucker punch from Gudbranson while his hands were tied up – may play into the decision to discipline.

“I've heard every possible reason why a player did what he did, and they're pretty good,” Campbell said. “But it is what it is and we have to look at it and look at the player's side of it and the team's side of it. I'm sure if you talk to the other player, Gudbranson, he's not real happy to receive what he received.”

MacLellan himself didn’t know where to draw the line.

“I mean, we haven’t seen it before,” MacLellan said. “Maybe you’ve got the [Brad] Marchand [licking] incident, it’s kind of similar, but a little different. I don’t remember seeing it happen before.”

Campbell and director of officiating Stephen Walkom admitted that in an ideal world, the play would’ve been blown dead more quickly when Colorado Avalanche forward Matt Calvert took a puck to the side of his face last Sunday but play continued on.

The sequence resulted in a goal for the Vancouver Canucks, but don’t expect any change to the current rule.

“Of course we would have liked to have blown the play down earlier when it resulted in an injury,” Walkom said. “Obviously we don't want players that are seriously injured on the ice, we don't want a long time to go by before we kill the play. It seemed like an eternity in that game, even though it was closer to four or five seconds. The puck was moving around, the guys were checking, the player attempted to get up.”

No change for the Coach’s Challenge

A few managers were upset and sought clarification after Avalanche coach Jared Bednar challenged a goal for a missed stoppage on Nov. 5, only to learn that the goal was not eligible to be challenged.

Since it wasn’t eligible to be challenged, the Avalanche were hit with a penalty – and it hurt. It was a double minor because Bednar made a previous unsuccessful challenge in the same game, the first coach to earn that dubious distinction.

The NHL did not apparently have much sympathy for Bednar, even though in other leagues such as the NFL, the coach is simply told immediately that type of play cannot be challenged.

That response is by design, because the NHL wants coaches to only challenge what they label as “egregious” missed calls – not to go on a fishing expedition to see what might work.

So far, the decision to attach penalties to failed challenges has worked as intended. The NHL said there have been 40 coach’s challenges this season, down from 59 at the same point last year, when there was double the success rate of this season.

Offside up for debate … again

Stop us if you’ve heard this before: the GMs will again discuss potential language changes to the offside rule at their next meeting in March. The debate was fired up again after Boston’s Charlie Coyle dragged the puck through his legs on a Nov. 7 goal.

Is that considered possession and control? According to the current rule, the answer was “no” and the goal was overturned.

Campbell has personally urged the GMs to consider a change to that definition, as well as the “skate in the air” rule. If a skate is in the air while the other foot is offside, that can also wipe out an otherwise legal zone entry.

Just don’t hold your breath. Offside has been written in the rule book the same way since 1955 – and when presented with the same discussion points two years ago, the GMs declined to make any changes.

“The rule is the rule,” Florida Panthers GM Dale Tallon said Tuesday. “Offside is offside. It’s black and white as far as I’m concerned. If you start messing around with different rules and different applications within the rules, then it gets confusing. We’ve gotten this far with it, I’m okay with the rule as it is.”