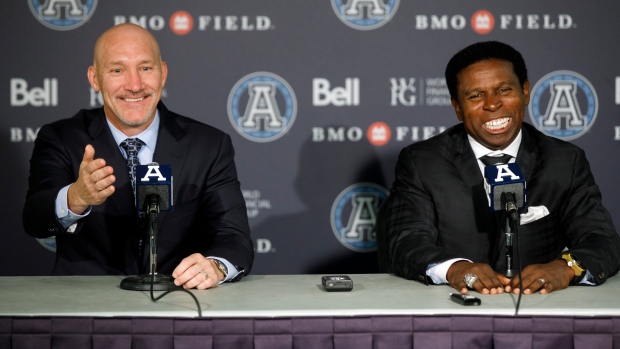 All Eyes on Collaros

Zach Collaros remains the key name in question as the trade deadline draws closer. Dave Naylor notes the biggest question of the deadline seems to be whether the Argonauts will hold on to the quarterback or trade him, most likely to the Winnipeg Blue Bombers.

The biggest question leading into the CFL trade deadline seems to be whether the @TorontoArgos keep @ZCollaros7 or trade him, most likely to @Wpg_BlueBombers. #CFL #argos #bombers

No Change of Heart

Head coach Khari Jones said earlier in the day he didn't expect the Montreal Alouettes to make a move today, and according to Dave Naylor, the team's stance hasn't changed as the deadline creeps closer.

Hearing from CFL sources the @MTLAlouettes are not expected to be active before the 4 p.m. trade deadline. #CFL

Could the Argos be players?

The Argonauts will hold a front office meeting at 3pm et to determine their plans for the deadline, personnel executive John Murphy told Matthew Scianitti.

#Argos personnel exec John Murphy says there's "significant" interest in Toronto today. According to Murphy, he, Pinball Clemons, Corey Chamblin, and Bill Manning will meet at 3pm ET to discuss offers and Argos current roster, and then decide what, if anything, Argos will do.

Hamilton has the best record in the CFL, but will they add on for the playoffs?

Hearing from #CFL sources that #Ticats expect to be quiet on CFL deadline day. That does not mean Hamilton won't take calls ("never say never") but hearing from league sources that Ticats have no trade expectations Wednesday.

According to TSN's Matthew Scianitti, now-former Argos GM Jim Popp had a one-year deal in place to bring Zach Collaros back to Toronto next season, but never got a chance to bring that deal to Maple Leaf Sports & Entertainment. He also turned down inquiries about Collaros from the Blue Bombers and Ticats.

All 5 QBs at #Argos practice. McLeod Bethel Thompson taking first team reps. James Franklin Dakota Prukop &Michael O'Connor in helmets &practice jerseys. Zach Collaros is in sweats and a hoodie. It is interesting. Collaros is healthy. #Argos apparently not willing to activate him

The Montreal Alouettes lost left tackle Tony Washington for the remainder of the season on Saturday, but it does not appear the team will make a move to improve their offensive line depth.

Alouettes head coach Khari Jones told TSN Radio 690 Montreal on Wednesday that he does not expect the team to make any moves ahead of the deadline.

The Alouettes (8-6) have clinched a playoff spot, but remain four wins back of the Hamilton Tiger-Cats for first in the East with four games left on their schedule.

The Alouettes are back in the playoffs. But, what about the coach that helped get them there. Is there a contract extension around the corner?

Eyes on the Argonauts

The Argonauts shook up their front office on Tuesday ahead of the deadline, replacing general manager Jim Popp with Pinball Clemons and Clemons could use Wednesday's deadline to help determine the team's future plans at quarterback.

TSN Football Insider Dave Naylor reports the Winnipeg Blue Bombers and possibly others are interested in quarterback Zach Collaros. Naylor notes Popp's intention was to re-sign the quarterback, who has not played since Week 1, when he was with the Saskatchewan Roughriders.

Most intriguing question about CFL trade deadline is what @TorontoArgos do with @ZCollaros7. The @Wpg_BlueBombers and possibly others are interested. Previous GM Jim Popp wanted to re-sign him for 2020. #CFL #argos

The Argonauts (2-12) currently do not have any of their top three quarterbacks under contract for next season.

Naylor wrote Tuesday night he believes the Winnipeg Blue Bombers best shot is to stick with Chris Streveler as their starting quarterback, rather than bringing in a replacement.

Streveler has thrown seven touchdowns in his past five starts as the Blue Bombers have gone 1-4.

I get the concern around the @Wpg_BlueBombers offence. But I think it’s fantasy that you can bring in another starting QB at this stage. Streveler needs to develop and helping him do so is Bombers best shot. Not putting him on the bench to be replaced by ... whom ... exactly?

Winnipeg has already clinched a playoff spot, due in large part to their strong start before Matt Nichols' season-ending injury.