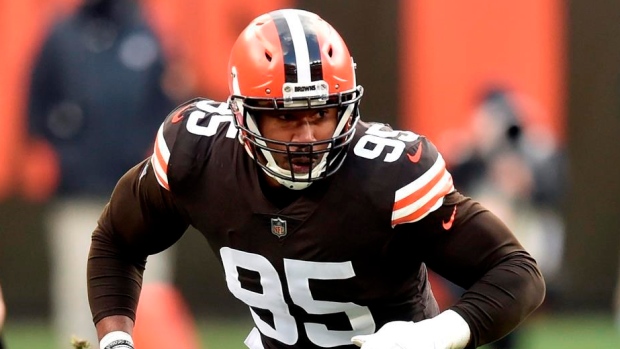 As we did last season, the team at TSN Edge will preview each NFL division before the Tampa Bay Buccaneers and Dallas Cowboys kick off the 2021 season on Thursday night.

This year, we’re going to look at the Super Bowl and divisional odds for all 32 teams, and dive into one storyline that we’re keeping an eye on.

In this AFC North preview, we’ll look at taking the over on Lamar Jackson’s rushing prop, Myles Garrett to win Defensive Player of the Year, why the Steelers will finish third in the division, and break down the over on Joe Burrow’s passing yards total.

Do I even have to really explain this pick? Since entering the league in 2019, Jackson has been an absolute weapon with his legs. As a rookie he rushed 147 times for 695 yards in just seven games and has followed that up with 335 carries for 2,211 yards in his first two full seasons. The Ravens run game took a massive blow this off-season, losing J.K. Dobbins for the season with an ACL injury. While I firmly believe Gus Edwards, and the recently signed Le'Veon Bell are more than capable of handling the running duties, Jackson could be used even more this season than we originally thought. With the added 17th game, the quarterback would need to average 52.9 yards per game to cash the over. His career rushing yards per game sits at 63.2 entering the year. The numbers explain themselves, and Jackson finds himself in the fourth year of an offence he has looked very comfortable in, so why change it up now? Take Lamar to run past his season rushing prop of 900.5 yards.

This could be the year that Garrett adds his name to the list of Defensive Player of the Year Award winners. The defensive end has been one of the NFL’s best edge rushers since entering the league in 2017 and this Browns defence will give him a chance to have his best season yet. Cleveland made two splashes this off-season with the additions of Malik Jackson and Jadeveon Clowney, two pass-rushing threats who could help free up Garrett. The 25-year-old suited up in 14 games last season, sacking the quarterback 12 times, while totaling 33 solo tackles and 18 QB hits. Since 2011, eight winners of this award have been dominant pass-rushers, and seven have been defensive linemen. At +600, Garrett is worth keeping an eye on as he looks to become the first Browns player to win the award.

Finish third in the division +120

It wasn’t long ago that the Pittsburgh Steelers were the final undefeated team of the 2020 season with an 11-0 record heading into Week 13. Oh, how things have changed. Pittsburgh finished the season 1-4, with the low point coming in a 27-17 loss to the Cincinnati Bengals on Monday Night Football as a 14.5- point favourite. Pittsburgh’s season came to a crashing end in the wild-card round when they were steamrolled by the Browns 48-37. The offensive line was one of the worst in the league last season and hasn’t gotten any better, and Ben Roethlisberger appears to be near the end of the road. The defence, despite losing a few key pieces, will still be good enough to win this team some games. But the roster just isn’t as good as it needs to be to compete at the top of this division with the Ravens and Browns. I like Pittsburgh to finish third in the AFC North and I’m inclined to jump on that at +120.

Through nine games last season, Joe Burrow was averaging 276 passing yards per game and was on pace for 4,416 yards and 21 touchdowns as a rookie. A torn ACL in Week 11 ended his season and dashed all hopes of him winning offensive Rookie of the Year, but the quarterback looks locked in and ready to once again take the league by storm in 2021. With the added 17th game this season, Burrow will need to average 250 yards per game to hit the over on his passing prop. The Bengals made a big splash at the 2020 draft, taking Burrow’s former LSU teammate Ja’Marr Chase and have added him to a wide receivers room that already has Tyler Boyd and Tee Higgins. This young quarterback was on pace to fly past this number last season, and now has an added game on the schedule. Don’t overthink it; take the over.