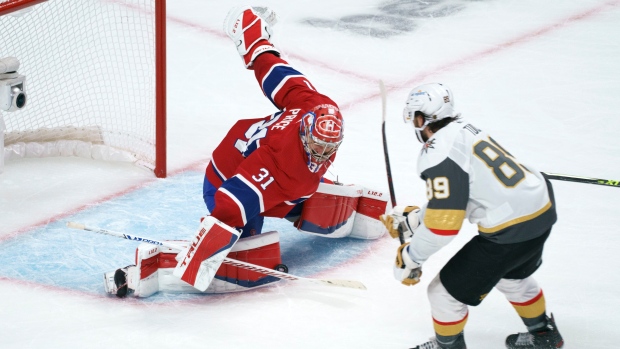 The Vegas Golden Knights entered their series with the Montreal Canadiens as the largest favourite for a Stanley Cup semifinal in 32 years.

While that number has come down a bit following a split of the first four games, the Golden Knights remain the overwhelming favourite with the series tied 2-2 as it shifts back to Las Vegas for Game 5.

The Canadiens, who earned a split in the first two games of the best-of-seven at T-Mobile Arena, are +215 to win.

The last time that Montreal won a Game 5 after being tied 2-2 in a best-of-seven playoff series was the 2002 Conference quarter-finals, when Jose Theodore stood on his head in a 2-1 win over the Boston Bruins.

The eighth-seeded Canadiens were outshot 44-13 by the No. 1 seeded Bruins in that game.

Doug Gilmour set up Oleg Petrov for the eventual game winner late in the opening frame.

Theodore stopped 43 of 44 shots to preserve the upset on the road.

Montreal went on to win the series in six, with Theodore making 34 saves in a 2-1 win in the series finale on home ice.

The Canadiens may need similar performances from Carey Price to close out the Golden Knights and advance to the Stanley Cup final.

With the semifinal tied at two wins apiece, Brendan Gallagher explains why the Habs are ‘comfortable’ in long series and the ‘pressure falls on’ Vegas. More from @markhmasters: https://t.co/iy37N9vuBL#TSNHockey | #StanleyCup pic.twitter.com/qF6BqzNE2L

While oddsmakers still have them as a heavy underdog to win the series, the Habs have proven they can skate with Vegas, including a dominant performance in Game 4 in which they came out on the losing end.

As far as the sportsbooks are concerned, the Golden Knights in six is still the most likely outcome.

Here is a look at the updated odds for the exact outcome of the series:

Anyone who jumped on the opportunity to bet on Vegas to win the series at -160 after Game 3 can now hedge with the Habs if they feel inclined to do so and guarantee themselves a profit.

On the flip side, anyone who took Montreal to win the series in six or seven at +1000 and +900 odds respectively can hedge with the Knights to win in six or seven.

The Tampa Bay Lightning (-185) are one win away from the Stanley Cup final following an 8-0 win over the New York Islanders in Game 5 on Monday night.

“The #Isles were that car (on the Autobahn) standing still while the Lightning blew by at over 200 km per hour...”@CraigJButton & @dutchysc on Tampa’s beatdown on the Islanders to take the series edge: https://t.co/TGm68AxX9c#TSNHockey | #StanleyCup pic.twitter.com/zLOI7enlpK

Steven Stamkos and Alex Killorn each had two goals and an assist. Nikita Kucherov had three assists. Brayden Point had a goal and an assist – becoming just the second player in NHL history to record a goal in eight straight playoff games.

Collecting the 7th of his team's 8 goals in a Gm5 flattening of the Islanders on Monday night, @TBLightning superstar Brayden Point has now recorded a tally in each of his last 8 games of these 2021 #StanleyCup Playoffs. With that, he now sits alone in 2nd on this list of streaks pic.twitter.com/AhN4xy2UEL

Andrei Vasilevskiy made 21 saves for the shutout. It’s the first time in two decades that a team scored eight or more goals in a shutout win in the playoffs.

The Lightning improved to 13-0 following a loss in the playoffs dating back to the first round in 2019. Tampa Bay’s ability to respond has become a popular trend for bettors to capitalize on this postseason.

It will be interesting to see how long they can go without back-to-back losses.

Engineering a dominant 8-0 clobbering of the Islanders to go ahead 3-2 in their #StanleyCup Semi-Final series earlier on tonight, the @TBLightning registered the 8th ever performance on this list of one-sided shutout victories by a team in playoff history pic.twitter.com/LlHpEhiPUq

Now one win away from the Stanley Cup final, the Lightning are now the consensus favourite to repeat as champions at even money.

Belgium, Austria and Denmark all advanced to the Round of 16 at Euro 2020 with wins on Monday.

The big surprise was Denmark.

With a 4-1 win over Russia, Denmark secured second place in Group B and became the first team to reach the knockout stage despite losing its first two games since the group stage began in 1980.

Denmark will face Wales on Saturday.

Austria was -275 to advance to the Round of 16, where they will play Italy.

Belgium clinched top spot in Group B with a perfect 3-0 record after beating Finland 2-0.

Georginio Wijnaldum has another! Netherlands looks to be well on their way to a perfect Group Stage. #EURO2020 pic.twitter.com/ouQwtX24PC

Meanwhile, the Netherlands also improved to 3-0 at Euro 2020 with a 3-0 win over North Macedonia.

The 2021 NBA Draft Lottery will be held tonight to determine the top four picks.

The remaining teams will be slotted into their pre-draft lottery positions.

The Houston Rockets, Detroit Pistons and Orlando Magic all have the best chance to land the first-overall pick with all three teams at a 14 per cent chance.

All three teams are listed at +550 to win the lottery.

The Toronto Raptors have a 7.5 per cent chance to land the first pick. As of this morning, the Raptors are listed +1100 to win the lottery.