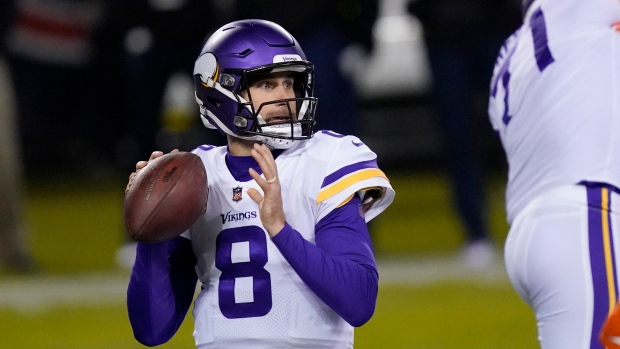 Welcome to Week 6 in the NFL.

It looks a lot different than it did even a couple of weeks ago.

For the first time this season, a team other than the Kansas City Chiefs is the betting favourite to win the Super Bowl.

In fact, there are two of them.

Then there’s the Tampa Bay Buccaneers, which beat the Philadelphia Eagles 28-22 on Thursday Night Football, but didn’t cover again.

Following that victory, the Bucs were made a co-favourite to win the Super Bowl at +550.

Meanwhile, the Dallas Cowboys opened the season at +2900 to win the Super Bowl, but that number is down to +1300 following a 4-1 start.

The Cowboys are the league’s last remaining undefeated team against the spread at 5-0.

Can they keep it going as a 3.5-point favourite against Bill Belichick’s New England Patriots on Sunday?

Meanwhile, the Arizona Cardinals are the league’s lone remaining undefeated team at 5-0 straight up.

However, they will face what is likely their toughest test of the season so far as a three-point underdog when they visit the Cleveland Browns on Sunday.

Here are some of our best bets for Week 6 in the NFL.

The Vikings could very well be 5-1 right now, with a couple of missed opportunities in close losses to the Cincinnati Bengals and the Arizona Cardinals the first two weeks of the season on their record.

At Cincinnati in Week 1, Minnesota overcame a slow start to force overtime and got the ball with a chance to win it in the extra frame.

However, Dalvin Cook put the ball on the ground, and the Bengals took it the other way to set up the game-winning field goal in overtime.

Fast-forward to Week 2, and the Vikings had a chance to beat the Cardinals with a 37-yard field goal in the final seconds of regulation.

The Vikings caught a bit of a break in last week’s 19-17 win over the Detroit Lions, but I think they will hit their stride in Week 6 with a chance to climb back to .500 entering their bye week.

The Panthers have cooled off a bit with back-to-back losses to the Cowboys and Eagles following a 3-0 start.

With Christian McCaffrey sidelined, the pressure will be on Sam Darnold to keep up with the Minnesota offence.

I think the Vikings score more than enough points to cover laying less than a field goal on the road.

This game has shootout written all over it. We all know how good the Chiefs offence is, but to put it into perspective, prior to Week 5 they were the number one offence by EPA through the first four weeks of any team over the last decade.

But it’s not just great offence that is going to push this game over the total.

Both the Chiefs and Washington have surrendered at least 29 points in four consecutive weeks, while Kansas City is the only team to allow its opponent to exceed their team total in every game this season.

Statistically, KC is the worst defence in the NFL, and while they’ve faced plenty of quality opponents, they’ve been vulnerable versus everyone. Two weeks ago they allowed Philadelphia, which averages 23 points per game, to rack up 460 total yards, while not forcing a single punt.

The Chiefs defence ranks last in scoring rate allowed per drive and you know who ranks second last? Washington.

The Football Team is fresh off making Jameis Winston look like Dan Marino, and over the past four weeks they have also yielded four TD passes to Matt Ryan, and 344 total yards and two scores to Daniel Jones. Just imagine what Patrick Mahomes is going to do to them.

As for Washington’s offence, Taylor Heinicke has thrown at least two TD passes in three of his past four outings, and is certainly capable of helping the Football team do their part in pushing this contest over the total.

Pick: Chiefs at Washington over 54.5

Things are a lot different in New England now that Tom Brady is gone.

Since the superstar quarterback left, the under has hit in nine of the team’s 11 home games, with just 39 points per game being scored in those contests.

This season, the under is 3-0 at Foxborough and I like that trend to continue despite a high-powered Cowboys offence coming to town.

Just two weeks ago, we saw what this Patriots defence is capable of against one of the top offences in the league, holding the Tampa Bay Buccaneers to a season-low 19 points.

The Bucs have averaged a full 16.2 points per game more than they scored against New England.

The Cowboys enter this game with the second-most points per game in the league, averaging 34 points per game and have scored at least 29 points in four of their five games.

After three games at home – where they scored 36+ points a game – they hit the road for the first time since their 20-17 loss to the Los Angeles Chargers in Week 2.

Dating back to last season, the Cowboys have scored 24.25 points per game on the road with Dak Prescott under centre and are averaging 39.8 per game at home.

Prescott struggled, tossing for just 212 yards with no touchdowns and an interception.