MONTREAL (March 19, 2021) – Canada’s top sports networks TSN and RDS have announced the launch of TSN 5G View / Vision 5G RDS, an exclusive in-app (iOS and Android) feature that leverages Bell 5G to offer fans exciting and interactive new ways to watch sports. Making its debut tonight on TSN and RDS’s regional coverage of the Montreal Canadiens’ game against the Vancouver Canucks, this innovative 5G-enabled technology lets fans control how they view every angle of the game on their smartphones, getting up close to every goal, pass, hit and penalty with zoom, pause, rewind and slow motion capabilities made possible with Bell’s superfast, high-capacity 5G mobile network.

In addition to the immersive mobile experience, the new 5G technology also allows viewers of the TSN and RDS broadcasts to get closer to the action, featuring views from never-before-seen camera angles during in-game commentary, analysis, replays, and post-game recaps.

TSN and RDS subscribers on the Bell 5G network with a 5G device can sign in to their TSN and RDS apps to check out the new technology live in action. TSN 5G View / Vision 5G RDS will expand to more sports events, teams and venues over time.

Leveraging these TSN 5G View / Vision 5G RDS capabilities during select Montreal Canadiens home game broadcasts on TSN and RDS, available in the team’s designated broadcast region (Québec, Atlantic Canada, and Eastern Ontario), analysts will bring viewers a never-before-seen perspective, zooming in and out and rotating around the action throughout the game and during intermissions.

“TSN and RDS are proud to partner with the Canadiens to unveil this revolutionary new way to watch hockey. We’re literally handing control of the viewing experience to our fans through their Bell 5G smartphones,” said Nathalie Cook, Vice-President, TSN & RDS. “Because they can’t attend the games in person, we think hockey fans will be delighted with this innovative new option to get close to the action.”

“TSN 5G View / Vision 5G RDS is a game changer for fans and we’re excited to launch this 5G innovation with TSN, RDS and the Canadiens tonight,” said Claire Gillies, President of Bell Mobility. “We are deploying today the generational opportunities of 5G, and Bell remains at the forefront of innovation with both Canada’s fastest 5G network and this first-of-its-kind 5G viewing experience for our customers.”

Through the single largest technology effort of its kind, more than 80 time-slice cameras have been installed around the bowl of the arena in the Bell Centre as well as 1,500 metres of fibre, 96 dedicated servers and a specialized control centre to bring the technology to life on the Bell 5G network. TSN 5G View / Vision 5G RDS utilizes equipment and technology from 4DReplay.

“We are proud to partner with TSN and RDS, together with Bell and its 5G network, to offer our fans a unique immersive mobile experience,” said France Margaret Bélanger, Executive Vice President and Chief Commercial Officer, Montreal Canadiens. “This technological innovation highlights our commitment, along with TSN and RDS, to offer our fans a viewing experience that is even closer to the action on the ice.” 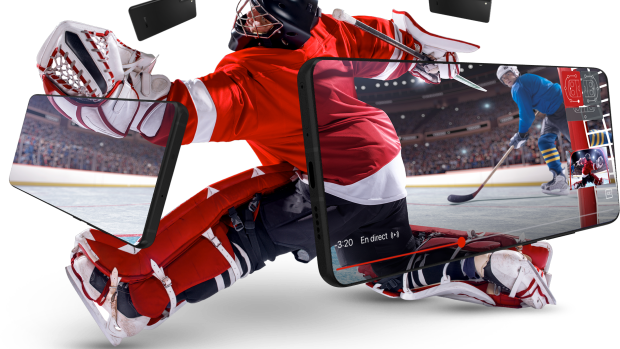 TSN 5G View / Vision 5G RDS mobile viewing options are available exclusively to TSN and RDS app users (direct subscription or through a TV package) with a Bell Mobility 5G device when they download the latest app release. The feature is available at no additional charge though data charges may apply depending on a customer’s service plan.

TSN is home to the Winnipeg Jets, Montreal Canadiens, Ottawa Senators, and Toronto Maple Leafs as part of its package of regional NHL regular season games. This season, TSN delivers 42 Jets games on TSN3, 34 Canadiens games on TSN2, 40 Senators games on TSN5, and 18 Leafs games on TSN4, all in the teams’ respective designated broadcast regions.

NHL hockey on RDS
RDS is the official French-language broadcaster of the Montreal Canadiens and the Ottawa Senators and holds the regional rights to regular season games for these two National Hockey League (NHL) teams. This season, RDS delivers 41 Canadiens and 38 Senators games in the teams’ respective designated broadcast regions.