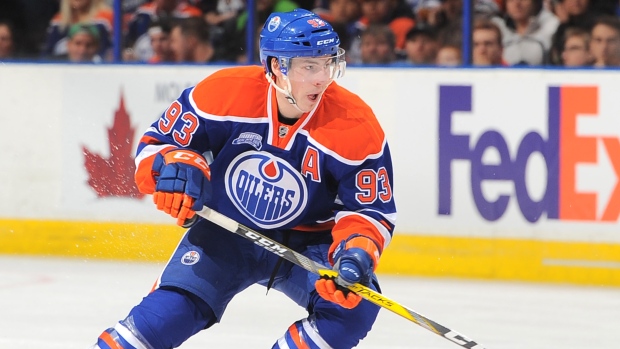 For all of the talk leading into last week’s NHL draft, not a single blockbuster materialized.

A relatively flat salary cap, scarcity on defence and sky-high prices for marquee names were to blame.

But even with the draft in the rearview mirror, the most pressure rests squarely on Edmonton Oilers general manager Peter Chiarelli to remake his forward core - in an effort to both acquire a coveted right-shooting defenceman and make room for a potential free agent up front.

So, who is No. 1 on the TSN Trade Bait board du jour? That would be Ryan Nugent-Hopkins, but it depends on the Oilers’ plans in free agency.

For now, Nugent-Hopkins remains a valuable luxury at centre with Connor McDavid and Leon Draisaitl.

But if the Oilers do indeed land left winger Milan Lucic, who visited Edmonton on Tuesday and got reacquainted with his old GM Chiarelli, then Taylor Hall will rocket to the top of the list.

Hall, 24, is Chiarelli's premier trade chip up front - aside from McDavid and Draisaitl. He presents the best opportunity to bring back a top-pairing defenceman the Oilers so desperately crave on the right side.

Adding Lucic would give Chiarelli the depth at left wing to move Hall to fill a void on the blueline. Keeping Lucic and Hall at left wing would also allocate a disproportionate about of salary cap space to that position.

With Lucic likely commanding in the $6 million or more range, that would tie up nearly one-third ($19.9 million) of next season's $73 million cap on just left wingers, including Hall ($6 million), Benoit Pouliot ($4 million), Patrick Maroon ($1.5 million), Lauri Korpikoski ($2.5 million) and Matt Hendricks ($1.85 million) - all on the left side. That's too much.

Finnish right wing Jesse Puljujarvi landing in Edmonton’s lap at No. 4 overall last weekend already increased the likelihood that one of the Oilers’ $6 million forwards would be on the way out of town.

The story remains the same since April: it’s seemingly a matter of who gets moved and when, not if.

In the meantime, prices could fall slightly for St. Louis defenceman Kevin Shattenkirk as the week drags on. Blues GM Doug Armstrong knows Shattenkirk’s value is higher now — the 27-year-old blueliner is easily the best defenceman readily available this summer - than it will be at next February’s trade deadline. The Shattenkirk camp was fully expecting a trade during draft week.

And, until July 1 hits and P.K. Subban’s no-trade clause kicks in or Canadiens GM Marc Bergevin definitively says he is not listening to offers, the Montreal defenceman will remain on the list.