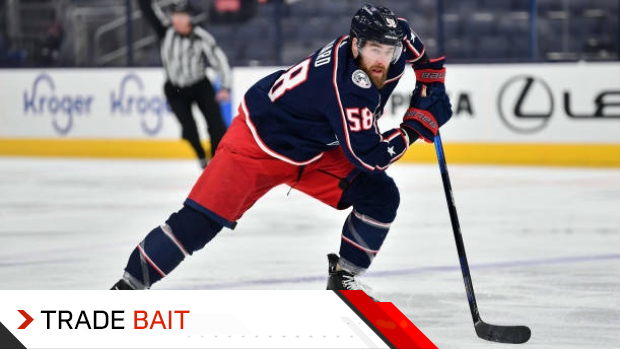 There’s a new sheriff in town atop the TSN Trade Bait board with just 12 days to go until the NHL’s trade deadline.

Columbus Blue Jackets stalwart defenceman David Savard has climbed into the top spot, knocking Nashville Predators blueliner Mattias Ekholm off his post for the first time this season as the Preds have vaulted into the final playoff spot in the Central Division.

That’s caused Ekholm and Predators pending free agent winger Mikael Granlund to tumble out of the top five. It’s not accurate to say Predators GM David Poile has pulled his players off the market, but it is fair to say he is willing to give his team every opportunity until the April 12 deadline to show itself playoff worthy.

It’s been quite the opposite in Columbus, which dropped back-to-back games against Detroit over the weekend, causing Savard and team captain Nick Foligno to shoot up the board.

According to HockeyViz.com, the Blue Jackets have just an 11 per cent chance to make the playoffs in the Central, while Nashville is up to a 48 per cent shot.

That development may also cause the Toronto Maple Leafs to consider Plan B on their quest to add a forward, as Nashville’s Granlund was believed to be their primary target.

New Jersey Devils winger Kyle Palmieri slid into the No. 2 spot, ahead of Buffalo’s Taylor Hall. While trade talks have heated up on Hall, Palmieri has four times as many goals this season and his contract at $4.65 million is infinitely more tradeable than Hall’s $8 million hit.

Interest continues to remain strong in Detroit centre Luke Glendening, who is up to No. 9.

Florida goalie Chris Driedger and Philadelphia centre Scott Laughton were the two new names to join Trade Bait as the list expanded to 30 names in play.

With Spencer Knight now signed, Florida has the flexibility to move Driedger if so inclined, as he is also a potential Expansion Draft target.

The Flyers also have a decision to make with Laughton. The pending UFA is due for a raise, on pace for his second straight 45-point season over 82 games and he plays his role to perfection as a feisty, 200-foot player. If the Flyers fall further out of the playoff mix, GM Chuck Fletcher may have to consider moving him.