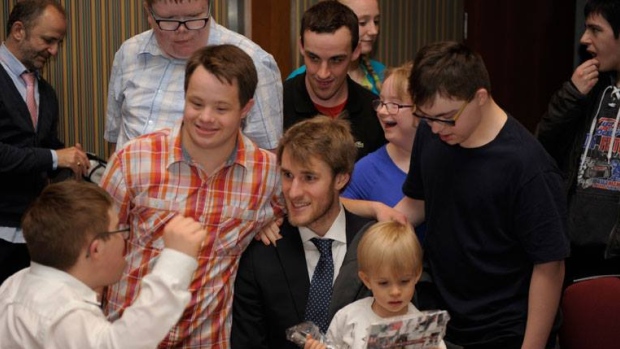 The Capital City Condors held their season-ending banquet on Saturday evening, but many of the 300 attendees were distracted during the course of the proceedings.

While the event was in full swing, the Ottawa Senators were locked into a fierce battle with the New York Rangers in Game 5 of their playoff series. The organizers were unable to stream the game on a projection screen, so a large group of Condors kids huddled around a laptop to watch the third period.

As the Senators trailed 4-3 in the dying moments of the game, a spontaneous “Go Sens Go!” chant erupted inside the hotel ballroom, as the kids were trying their best to send positive energy up the road to the Canadian Tire Centre.

The kids had mixed emotions, as the Senators playing meant that their favourite player Kyle Turris would not be attending their banquet.  Turris had been the Condors honorary captain for the past five years and was easily the favourite NHL player of every single player in the room. Kyle and his wife Julie had become public champions for special needs hockey in the community, becoming hands-on volunteers with the Condors over the past few years.  The Turris’ rarely missed a banquet or major event on the Condors calendar.

Jim Perkins, the Condors co-founder and president, made an announcement during the opening portion of the evening to let everyone know that Turris would not be attending the event.

“Kyle really wanted to be here, but of course, he kind of has something else going on,” Perkins deadpanned to the room. The audience erupted in laughter, knowing full well that Turris was in the middle of a heated NHL playoff game.

Shortly thereafter, Turris scored the game-winning goal and the room once again exploded – only this time with cheers and shouting. It was around 6:20pm Eastern Time and nobody could have imagined that the overtime hero would come into their banquet hall less than 90 minutes later.

But after doing a series of post-game interviews and showering inside the Canadian Tire Centre, Turris put on a dark suit, white dress shirt and a blue tie and headed over with his wife Julie to the banquet room – which was ironically located inside the New York Rangers team hotel in Ottawa.

The attention of the audience was fully at the front of the room, as Perkins was concluding the awards portion of the evening. In the back of the room, Perkins noticed Julie Turris slip inside – followed by her husband Kyle. At that point, Perkins decided to surprise the crowd by saying, “You know, there is a guy who wears number seven who’s in here now.”

Everyone turned around, craned their necks and were in utter disbelief at what they were seeing. Kyle Turris – fresh off scoring the overtime winner against the Rangers – was standing in their banquet room. Turris could have gone to any restaurant or bar in Ottawa on Saturday night and eaten for free after playing the role of playoff hero. But instead, before boarding a plane for New York on Sunday, he chose to spend his precious free time with a group of kids and parents with whom he and his wife shared a special bond.

“I’ve never been in an environment like that,” Perkins told TSN.ca on Sunday. “The place just exploded. It was like nothing I’ve ever seen before.”

Condors players immediately rushed towards Turris, making it impossible for him walk forward. According to witnesses, it was best described as a mob scene in the banquet hall. Turris was swarmed by dozens of kids and parents, who were thrilled beyond belief that he made the effort to come to their event.

Terry White and his 14-year-old son Brendan – who has been part of the Condors program for the past eight years – were among the first to swarm Turris at the door.  White described the scene as one of pure elation and excitement.

“The kids weren’t expecting him. It was phenomenal and it melted everyone’s hearts,” White said on Sunday. “Parents were in tears and choked up.”

Adam Hatfield’s 12-year-old son has been a part of the Condors program for the past two years and he was absolutely floored at Turris’ actions last night.

“There’s absolutely no way anybody could have faulted him for not being there. He was the hero of the night already and then he showed up,” Hatfield said, while his voice was cracking with emotion. “All I could think of was here is a guy who has championed this very special team. And he must have been exhausted playing an overtime game in the playoffs. And he still showed up. That night is going to live in the kids hearts forever.”

Turris spent his time at the banquet last night, posing for pictures, signing autographs and catching up with players and families – who were still in disbelief that he took the time to visit them during the Stanley Cup playoffs.

“He’s out of this world with the emotion he has for our kids. He’s just a class a guy,” added White. “He didn’t have to do that, but he has such a connection with our kids. He signed autographs, took pictures. It was so great and emotional.” 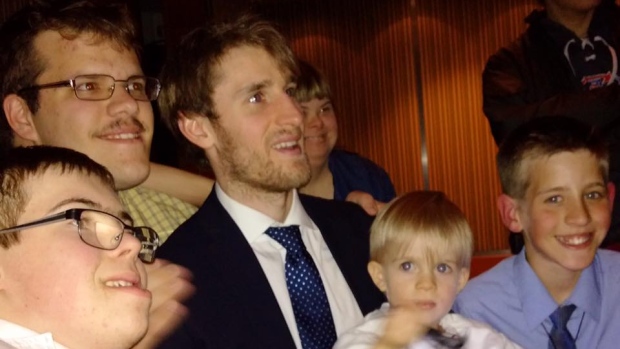 Fourteen-year-old Brendan White was so excited about meeting Turris last night that when he was on the phone with a friend this morning, the first words out of his mouth were, “Kyle came to our banquet last night!”

However, the Turris family has a history of surprising the Condors, dating back to their initial meeting with the team five years ago. Matt Carkner had been the club’s ambassador, but after signing a free agent contract with the New York Islanders, he suggested that his roommate Turris could serve as his replacement.

At his first meeting with Condors co-founder Perkins in the fall of 2012 in a tiny Italian deli in Kanata, Turris asked a lot of questions about the relatively small organization. As the meeting concluded, Turris asked to take a copy of the team yearbook, which featured headshot photos of all the kids.

The following week, Kyle and Julie showed up to the Condors first practice of the season. To the amazement of everybody, the couple was greeting each player by name – even though they had never met the kids in person before that date.

Condors organizers were baffled by their knowledge of the kids and approached them to ask how they could possibly know the names of children they had never met before.

Julie explained that after Kyle brought the yearbook home after the initial meeting with Perkins, the couple decided to spend several hours learning and memorizing the names and faces of each child in the book. They felt it would make the kids more comfortable if they were greeted individually. It’s a story that is still passed around the Condors circles with disbelief five years later.

Turris now lends his name to the Condors annual fundraising golf tournament. Adding his name has been a blessing for organizers, who have had an easier time getting sponsors and golfers on board with Turris’ name associated with their event.  This year’s tournament sold out in approximately six hours and Turris’ affiliation is a big reason for the excitement around the golf event.

“People see his name on it and it brings instant credibility because of his reputation. People know about Kyle and his character in this community,” says Perkins.

The annual Kyle Turris and Capital City Condors Golf Classic is slated for June 5th this year – which could fall right in the middle of the Stanley Cup Final if Ottawa advances that far with a few more playoff wins.

And while most people would be quick to dismiss Turris’ availability for that event if the Senators do reach the Stanley Cup Final, people around the Condors know that with Kyle Turris, you never say never.