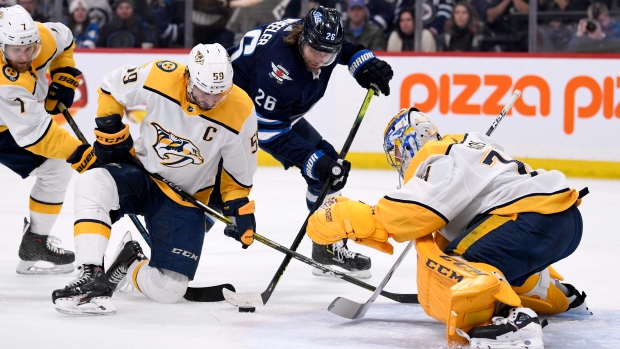 WINNIPEG — John Hynes is getting some quality play from his goaltenders since taking over as head coach of the Nashville Predators last Tuesday.

Hynes was behind the bench Sunday for his third game and watched as backup Juuse Saros made 28 saves for his first shutout of the season in a 1-0 victory over the Winnipeg Jets.

“I thought the guys in front of (Saros) defended really well, but any time a goaltender gets a shutout he's got to make some huge saves,” said Hynes, who's 2-1-0 with a Jan. 7 loss to Boston on the day he took over from a fired Peter Laviolette.

“It’s not like we’ve been six in a row at home that have been terrible,” Jets forward Andrew Copp said of the streak. “It’s kind of been intermixed with one-offs here and one-offs there.

“I mean, we’ve gotta right the ship and figure out what to do, but we’ve had success here for a long time. I don’t think it’s a long-term issue, but definitely something we gotta worry about for next game.”

Predators captain Roman Josi had his point streak end at 12 games. He had 20 points (seven goals and 13 assists) during the career-high run, which was the league's longest active streak and a franchise record for defenceman.

Copp had a short-handed breakaway early in the first period, but Saros stopped it in his 22nd game of the season.

It was the 102nd career game for Saros and his eighth shutout.

"I haven't really thought about it,” Saros said of the percentage of games he's won without allowing a goal. “When you look back into (it), it's kind of, of course, cool.”

A Winnipeg turnover in its defensive zone led to Yakov Trenin and Turris going in alone on Hellebuyck. Trenin passed the puck across the front of the net to Turris and he beat Hellebuyck for his first goal since Dec. 3, and sixth of the season, at 11:53.

The Predators outshot the Jets 15-7 in the opening period. Winnipeg had 11 giveaways in the frame compared to Nashville's two.

“We gave up a whole lot of chances in the first that we didn’t need to give up,” Jets coach Paul Maurice said. “Most of those were puck decisions.

“You can understand (them) when the other team does something really well and creates something. But we would have had the puck on our stick in a number of places where we think you should control it and not necessarily do more with it. Play a simpler game.”

Jets defenceman Tucker Poolman left the game in the first period with a lower-body injury and didn't return. Maurice didn't have any update.

“I thought they were fine,” Maurice said of the remaining five defencemen. “They moved (the puck) well enough to get us the zone time.”

Winnipeg had a power play early in the second, but Saros turned aside shots by Patrik Laine and Jack Roslovic.

The Jets outshot the visitors 11-9 in the middle period and only had one giveaway to Nashville's four.

Winnipeg went on another power play near the midway point of the third, but a blast by Laine bounced off Saros.

The Jets, who host Vancouver on Tuesday, are 2-2-1 in their past five games. Nashville plays in Edmonton Tuesday.