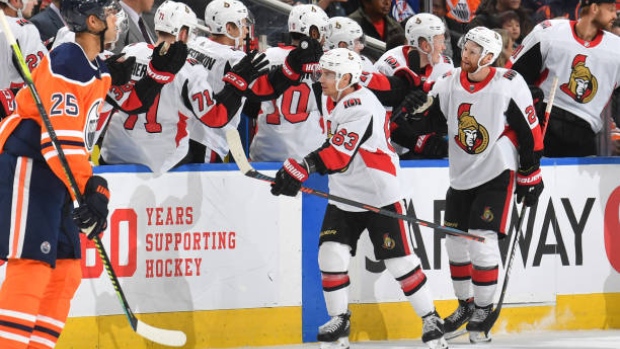 Tyler Ennis had a goal and two assists as Ottawa defeated the Edmonton Oilers 5-2 on Wednesday, a night after shouldering a loss in Vancouver.

"We've been good on back-to-back in the second game for whatever reason this season," Ennis said. "We knew it wasn't good enough in Vancouver (a 5-2 loss). We still didn't come out with our best in the first, but we stuck with it and got the win."

"We needed to man up. We were in the midst of a five-game losing streak and I didn't think it was a great effort, but back-to-back that's a good hockey game," said Senators head coach D.J. Smith. "We scored on our chances in the second period and it gave us some life."

Jujhar Khaira and Oscar Klefbom replied for the Oilers (17-10-3), who have lost three of their last four.

"We just stopped playing the right way, and cheated for offence," said Oilers forward Leon Draisaitl. "It doesn't really matter who you play, if you play that way you're not going to win many games."

Edmonton started the scoring with six minutes to play in the first period. Leon Draisaitl made a nice backhand feed in front to Khaira, who scored his sixth of the season past Ottawa goalie Craig Anderson. Ottawa challenged the play, believing Sam Gagner was off-side, but the review went Edmonton's way.

Anderson was returning from a lower-body injury.

The Senators surged into the lead with a pair of goals 11 seconds apart five minutes into the second period.

Ottawa tied the game shortly after a power play expired when Anisimov tucked a shot from in tight past Oilers goalie Mikko Koskinen. Then Brown beat Koskinen through the legs with a wrist shot for his first goal in 17 games.

Ottawa made it 3-1 12 minutes into the middle frame on a nice pass from Brown through to Ennis, who scored his eighth of the season. The goal chased Koskinen from the Oilers net after allowing three goals on 12 shots. Mike Smith came on in relief.

Edmonton got one of those goals back with just over two minutes to play in the second period when Klefbom beat Anderson on a long power-play shot.

The Senators made it 4-2 just 90 seconds into the third as Duclair picked up a wide shot behind the net and tucked it into the net for his 11th.

Ottawa kept the pressure on and was rewarded again with eight minutes left as Namestnikov was left alone in front to score his seventh.

The Oilers play the second game of a four-game homestand on Friday against the Los Angeles Kings. The Senators conclude a five-game road trip in Philadelphia on Saturday.

Notes: Ottawa's Brady Tkachuk played in his 100th NHL game… Out with injuries for the Oilers were Ryan Nugent-Hopkins (hand), Zack Kassian (back) and Matt Benning (head), while the Senators were without Cody Goloubef (undisclosed), Scott Sabourin (head) and Christian Wolanin (upper body).