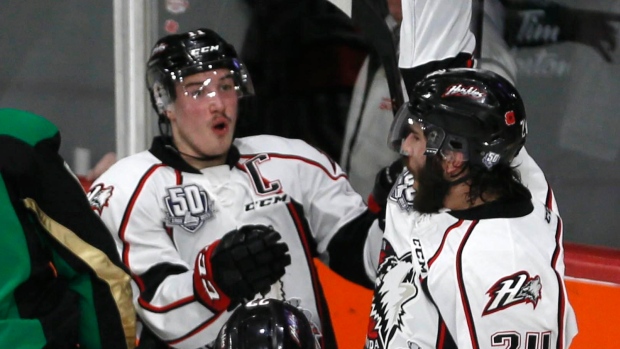 HALIFAX — Tyler Hinam of Cole Harbour, N.S., picked the right time and place to score the biggest goal of his junior hockey career.

The 19-year-old Hinam had a pair of goals, including the winner, as the Rouyn-Noranda Huskies beat the Prince Albert Raiders 6-3 on Monday at the Memorial Cup.

Hinam broke a 3-3 tie with 4:32 to go in the third period before Joel Teasdale secured the win with his second of the game just 1:25 later.

"We were just praying on the bench we would get the next one and fortunately it came out to me in the slot there and I was able to bury it," said Hinam. "I was pretty happy there."

Monday's game was a matchup of the top two ranked teams in the Canadian Hockey League.

But both teams dropped their tournament openers and were looking for a bounce-back performance.

"It was a must-win for us with our loss in the first game. It was an important one for us," said Huskies head coach Mario Pouliot.

"We know we can be better than that, but it'll help us be more confident with the win tonight."

"I thought we deserved better, should have won that game," said Habscheid. "A lot of chances a lot of posts, think five or six posts, missed three or four open nets. Just didn't go our way."

As the only winless team at the tournament with two straight losses, the Raiders will need a victory in their final round-robin outing against the OHL champion Guelph Storm on Tuesday or their season will be over.

"If we play the same way I think we'll be OK," said Habscheid.

The WHL champion has now lost 12 in a row at the four-team competition dating back five tournaments.

The last time the WHL champion won a contest was the 2015 semifinal, when the Kelowna Rockets beat the Quebec Remparts before falling to the Oshawa Generals in the final to start the streak of defeats.

The Regina Pats were able to win twice at last year's event and reached the final, but that was as the host team.

Hinam opened the scoring 4:34 into the game with his first of the tournament.

Cole Fonstad responded at 8:32, and Pachal gave Prince Albert the lead 13:47 when he snuck in from the point and one-timed a Gregor pass past Harvey.

The Raiders looked to be heading into intermission up 2-1, however Teasdale struck with a power-play goal with 1:27 to go in the period.

Bibeau buried a shot from in front of the net for a 3-2 Huskies lead at 12:59 second, but the teams went into intermission tied again as Gregor replied with 2:17 to go in the second.

"Up and down game, kind of a ping-pong match, not really our style," said Hinam.

The back-and-forth battle continued in the third with both squads getting a chance to break the deadlock, and it was Hinam who finally did when he beat Scott glove side on a broken play at 15:28.

Rouyn-Noranda will face the host Halifax Mooseheads on Wednesday in the final preliminary-round game of the tournament, and a rematch of the QMJHL championship that the Huskies took in six games.

Prince Albert has less than 24 hours to prepare for what could be its last game of the season.

"Do or die tomorrow," said Gregor. "(But) I think we have the group to come back."