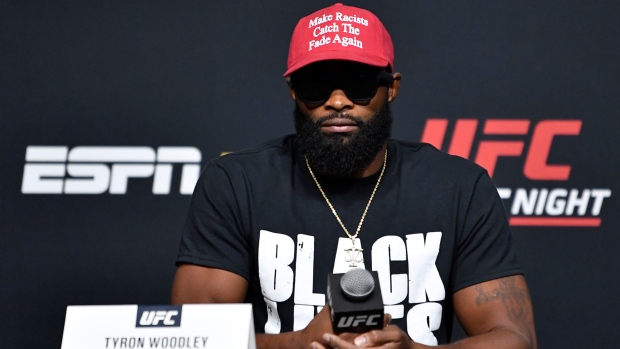 The road to another shot at the UFC welterweight championship runs through Saturday’s main event for former champion Tyron Woodley, but across the Octagon will not be just any other opponent.

Woodley will be face-to-face with former training partner turned contentious rival Colby Covington, a past interim champion in his own right, that is also gunning for another shot at the gold.

That’s just the beginning of the story.

Woodley and Covington have been sniping at each other for years as they built animosity towards a fight that has felt like it’s been continuously in the works.

With all of the hoopla surrounding this much anticipated bout, it would be easy to get caught up in the narratives. For his part, Woodley says he isn’t allowing his focus to be on anything other than proving he’s the superior fighter at the UFC Apex in Las Vegas on Saturday.

Woodley is no stranger to marquee fights, as he has faced some of the best welterweights in the UFC to gain and defend the belt. Despite the calibre of the men he’s battled in the past, emotions have never entered the equation for the 38-year-old before this fight with Covington.

Woodley says the build up that the pandemic restrictions have forced on this bout have helped him avoid situations where he would lose his focus going into the fight.

"This is the only fight where I could get emotional and I’m very thankful that this fight is happening now, it’s happening at the right time,” said Woodley. “Had it happened when it was supposed to happen, I was supposed to fight him in September of 2018, during those times with a press conference and (expletive)-talking and getting in each other’s face, maybe I would’ve taken myself out of the element that makes me the best, the fighter that I am.”

As far as the back and forth between the fighters, Woodley says that his opponent is trying to make a name off of him and not doing a very good job at the villain role he’s trying to portray.

"I’m the person that’s creating the legacy, he needs me for his legacy,” said Woodley. “He needed me the entire time. Go back and look at his social media from the end of 2016 to pretty much now, 99 per cent of his social media is about me, he’s been consumed with me. At the end of the day, you don’t see that on my page, you see Champ Camp, you see me training, you see me focused.”

"He’s having a hard time being the heel, how do you have to force someone to accept you as the heel? It’s not reflecting in his followers on social media. All the effort and work he puts into trying to be the bad guy, he should have two million followers, but he doesn’t, because nobody believes it, they know it’s all fake.”

Woodley captured the welterweight strap in July of 2016 with a victory over Robbie Lawler at UFC 201 and retained it four times before finally dropping it to Kamaru Usman at UFC 235 in March of 2019.

Despite an impressive run as champion, Woodley says his time at the top was not all it was cracked up to be in the end.

"It definitely wasn’t what I thought it was going to be,” said Woodley. “You envision life being so much easier and with more responsibility that you’re given, the more pressure comes with it. To whom much is given, much is required. Championship fights are what headline pay-per-views, so if somebody’s injured and can’t fight or somebody fails a drug test, you’re going to always be on the speed dial call, ‘hey we need you to fight a world championship fight against a tough competitor in three weeks.’

"You just had to be ready for that and at times it was very toxic for my life and you couldn't have just a regular life. You got to experience the bells and the whistles, the parties, the money. It was probably the period in my life where I was the most empty."

A victory on Saturday would snap a two-fight losing streak for the ex-champion and get him back on the right track as he tries to fight his way into title contention once again. Something that he wants to do for all of the people that have stuck with him during the hard times.