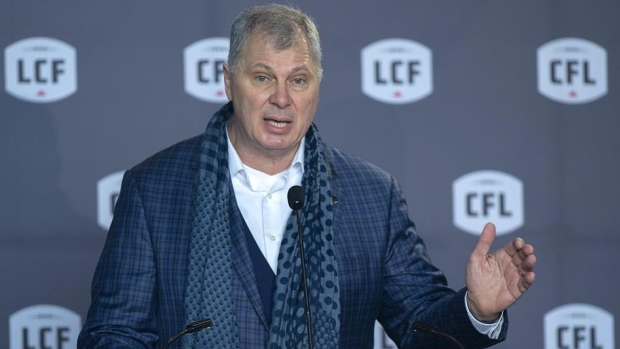 TORONTO — Commissioner Randy Ambrosie and the CFL have yet another issue to consider.

The Vanier Cup was scheduled for Nov. 28 in a city that hadn't yet been decided. The University of Calgary Dinos were to open the season as defending champion.

Mondays announcement is a significant development for the CFL. The league has pushed back the start to its regular season to September, at the earliest, due to the novel coronavirus outbreak but Amrosie has stated a cancelled campaign also remains a definite possibility.

Now, the CFL must examine why U Sports cancelled fall football and take that into consideration as it ponders its next move.

"We are aware of U Sports's announcement today that fall national championships, including those in football, will be cancelled this year," the CFL said in a statement. "We empathize with the administrators forced to make a difficult decision and with the athletes, many of whom are undoubtedly disappointed that they will not be able to play their sport anytime soon.

"We will continue to discuss the path forward with our colleagues and fellow football leaders at U Sports. And we want to assure those who aspire to a playing career in the CFL that we will continue to consider all options for evaluating great young Canadian players and inviting them into our league."

The CFL has called upon the Canadian government for financial assistance. It asked for $30 million immediately, additional monies if the ’20 season began late and up to $120 million for the worst-case scenario — the cancellation of the entire campaign.

The COVID-19 pandemic also forced the CFL to change its 2020 Grey Cup plans. Regina was to host this year’s game but instead will stage the '22 contest.

If there's an abbreviated '20 season, the Grey Cup finalist with the best regular-season record will host the CFL title game.

The CFL and CFL Players' Association continue to discuss 2020 contingency plans. Ambrosie has said all options remain on the table, including teams playing home games in stadiums without fans or in hub cities.

But with September still a ways off, the league is expected to take its time before deciding upon the 2020 season.

Last month, the CFL allowed its teams to open their fitness facilities for local players to participate in training or receive treatment.

But south of the border, a number of American college players have tested positive for the novel coronavirus.

Last week, Calgary's Amen Ogbongbemiga, a linebacker at Oklahoma State University, tweeted he'd had a positive test after attending a protest in Tulsa, Oklahoma. He was one of three Cowboys to have a positive test.

And multiple reports suggest at least five football players at the University of Alabama had tested positive. Another had three Auburn Tigers players doing so as well.

In collaboration with U Sports, the Canada West Universities Athletic Association, Ontario University Athletics and Atlantic University Sport all announced modifications to their fall schedules. The Ontario body said its cancellations are up to Dec. 31, 2020.

But U Sports said the RSEQ (Reseau du sport etudiant du Quebec) remains in deliberations and is expected to unveil its plans soon.

"Thinking of all the athletes and coaches today," tweeted Jake Thomas, a defensive tackle with the Grey Cup-champion Winnipeg Blue Bombers who played collegiately at Acadia.

Fortunately, those athletes affected by the cancellations won't lose their eligibility. But the absence of Canadian university football does create issues for the CFL.

The biggest question surrounds how the league will evaluate those players who're eligible for next year's draft? And that's a worthy consideration given the bulk of Canadians selected come from the U Sports ranks.

U Sports annually stages the East-West Bowl for players heading into their draft year. But the 2020 game, which was slated to be played last month, was cancelled due to the COVID-19 pandemic.

And now with no fall season, it will become difficult for CFL scouts and GMs to get up-to-date game film for evaluation leading up to the 2021 draft.