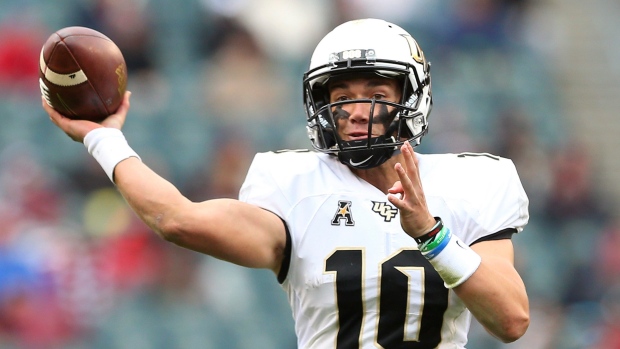 McKenzie Milton's long road from recovery is taking him away from UCF.

The Knights quarterback, who hasn't played in two years after a knee injury is entering the transfer portal, with Dillon Gabriel having taken control of the starting job.

Milton was the Knights' QB for their undefeated 2017 season.

"I know my clock is ticking," Milton told ESPN's Andrea Adelson. "I've only got one more year to play, and the momentum Dillon has, I wouldn't want any controversy in the locker room. He's earned the right to be the starter here at UCF. I see that, and I feel it's best for both UCF and myself that I move on elsewhere. I'm trying to chase the dream of playing in the NFL, so I've got to give myself the best opportunity to do that."

Milton incurred the brutal injury during a No. 23, 2018 game against South Florida in Tampa. Ligaments and an artery were torn, a nerve was stretched and his kneecap was dislocated. The injury required multiple surgeries. Even without having played in 24 months, Milton says he's confident that he will find a program that will offer him the chance to start.

"I'm going to tell them I feel really good, and I've got film to show them from scout team, making all the throws, making throws on the run," Milton said. "But I'll also let them know I'll be ready to compete full go in spring ball for a starting job, and by the time the season rolls around I'm going to be 100 percent ready to go. I'm confident in that. There's nothing for me to hide. I'll do whatever I have to do. It's not anything I'm worried about. If that was something I was concerned about, I probably wouldn't be making this move."

The 23-year-old Kapolei, HI native also says he harbours no ill will towards UCF as he heads for the exit door.

"There's no bitter feelings toward UCF," Milton said. "I will always bleed black and gold. It's the end of a chapter for me and my playing career here, and that's probably the bittersweet part of it. We were able to accomplish a lot in my time here, and it's been nothing but a blessing."

Milton will finish his Knights career with 9,760 yards of total offence and 92 touchdowns over 33 games.

While he was finally cleared to return in October,