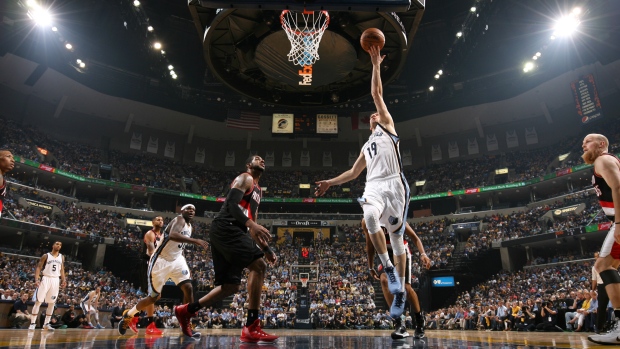 LaMarcus Aldridge led Portland with 32 points while taking more shots than anyone had ever taken against Memphis in the post-season, going 13 of 34. Damian Lillard added 14 points, shooting 5 of 21 overall and 0 of 6 beyond the arc. Nicolas Batum had 15 points. The Trail Blazers have lost five straight overall.

The Grizzlies swept Portland during the regular season and have won 10 of the last 11, including the first playoff game between the teams.

Game 2 is Wednesday night in Memphis.

Memphis started the post-season with home-court advantage for only the second time in franchise history, thanks to finishing with four more wins than Northwest Division champion Portland. The Grizzlies blew a 27-point lead in 2012 before losing that series to the Clippers, and they topped that lead going up by 29 late in the third quarter.

The banged-up and short-handed Trail Blazers proved no threat to make that kind of comeback with Aldridge doing everything he could to keep them in the game.

Portland looked out of synch from the start with Aldridge and Lillard combining to shoot 3 of 15 in the first quarter, and Aldridge even fell to the court when missing a dunk off an inbound lob at one point. It didn't get much better as Batum threw the ball to the sideline missing Robin Lopez in the third.

Memphis led 25-15 at the end of the first quarter and 58-39 at halftime. They grabbed their biggest lead with Randolph hitting a pair of free throws with 1:56 left in the third quarter at 82-53.

Trail Blazers: Aldridge topped Russell Westbrook's mark of 33 shots attempted in the playoffs against Memphis set in 2011. ... Lillard missed his first six shots and didn't score until midway through the second quarter with a layup. ... McCollum started only two games during the regular season, and Portland was 0-2 in those starts.

Grizzlies: Conley missed the last four games of the regular season with a sprained right foot. He got to rest the entire fourth quarter. ... Lee finished both of his 3-pointers, and Memphis went 21-3 this season when he hit two or more. ... Udrih hit his first six shots. ... Memphis sold out its 21st straight home playoff game.

Trail Blazers forward Arron Afflalo missed his fourth straight game with a strained right shoulder. ... Wesley Matthews (left Achilles' tendon) made the trip with the Trail Blazers with his role limited to cheerleader.