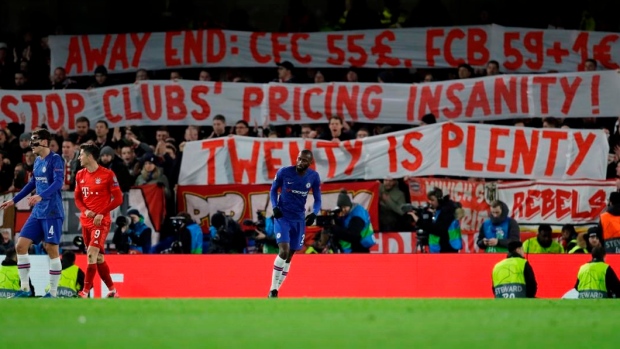 Bayern was ordered to pay 20,000 euros ($22,000) for “transmitting a provocative message of an offensive nature” during a Champions League game at Chelsea in February.

Fans unfurled banners in English protesting the “pricing insanity” of clubs charging away fans for tickets.

UEFA also fined Bayern an extra 20,000 euros ($22,000) for crowd disturbances at Stamford Bridge, where the German champion won 3-0 in the first leg of the round of 16. The return game has not been played.

Manchester City is appealing against a two-year UEFA ban from the Champions League, and now must pay a 3,000 euros ($3,300) fine for a uniform rules violations at its most recent game in the competition.

UEFA cited a rule governing the size of sponsor logos on warm-up jackets in announcing the “kit infringement” before City's 2-1 win at Real Madrid in February.

No date has been announced for a Court of Arbitration for Sport hearing where City will challenge its ban for misleading UEFA and breaking financial monitoring rules.