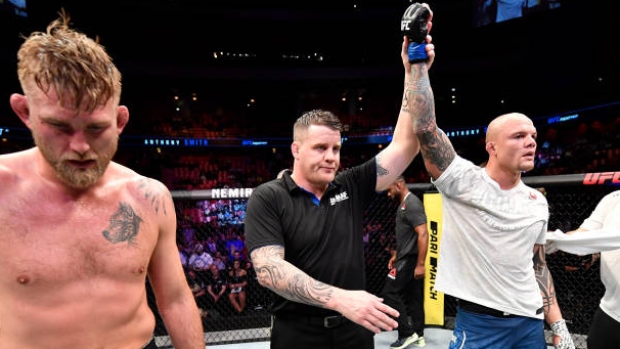 In the main event of UFC Fight Night in Stockholm, Sweden, 4th ranked Anthony Smith entered hostile territory and left with an upset victory over the hometown hero Alexander Gustafsson via fourth-round submission.

Gustafsson has been considered a top-3 light heavyweight for the last five years and fell just short of winning the title on two occasions against Jon Jones and Daniel Cormier respectively, where he lost by close decisions.

Both Smith and Gustafsson were coming off of losses to Jones heading into this bout and with the win, Smith enters himself back into the conversation as a future title challenger.

With the win, Smith improves to 4-1 since moving to the light heavyweight division.

UFC Fight Night at the Ericsson Globe in Stockholm, Sweden drew a sold-out crowd of 14,319 attendees for a $2 million (US) gate.

'Performance of the Night' bonuses were awarded to Smith for his submission win over Gustafsson, Aleksander Rakic and Leonardo Santos for their highlight reel knockouts over Jimi Manuwa and Stevie Ray respectively and Makwan Amirkhani for his anaconda choke submission victory over Chris Fishgold. All four athletes earned an additional $50,000 (US).

Faber coming out of retirement to fight in hometown

After a win in his hometown of Sacramento at the end of 2016, Urijah Faber decided to retire from MMA.

Despite the decision to hang up the gloves, Faber remained in the USADA drug testing pool should he decide to return. That decision proved to be a good one as Faber recently admitted that he was hoping to fight in the UFC once again.

With the UFC returning to Sacramento on July 13, there was no better place that Faber could have hoped to make his return and “The California Kid” will do so against Ricky Simon.

Simon, who is 3-0 in the UFC, is more than 13 years younger than Faber and is an interesting opponent for the returning veteran.

Also announced this week; Fight Night in Sacramento will be headlined by top-ranked bantamweight Germaine de Randamie facing undefeated fourth-ranked Aspen Ladd, who is coming off of a win two weeks ago against Sijara Eubanks in Rochester.

Following a first-round submission victory over Megan Anderson in her recent UFC debut at UFC Fight Night in Rochester, TSN asked Canadian Felicia Spencer if she would be interested in facing former featherweight champion Cris Cyborg on UFC 240 in Edmonton and Spencer replied that it would be an honour.

Cyborg replied on social media that she would accept that challenge. Two weeks later, UFC president Dana White confirmed to ESPN's Brett Okamoto that the matchup was set.

On Friday, the UFC officially announced that Cyborg and Spencer’s featherweight matchup would be the co-main event of UFC 240.

In a French-language interview, retired UFC legend Georges St-Pierre said that WWE representatives approached him while he was at the ESPYs and had expressed interest in working together.

“I was at an ESPN event in the United States, the awards ceremony, and I got approached by the WWE,” St-Pierre said. “I had just retired, and, it’s a form of competition, but of course, it’s also scripted, so I don’t know if I’d be willing to relive that. Perhaps for a special event, so I could taste it. But I don’t know if I’d want to sign a contract and do it every week and making it a living. Maybe for a special appearance.” (transcription courtesy: MMA Fighting)

St-Pierre retired in February because he was unable to secure a bout with lightweight champion Khabib Nurmagomedov and with no other intriguing matchups possibilities, the Canadian MMA legend decided to call it a career.