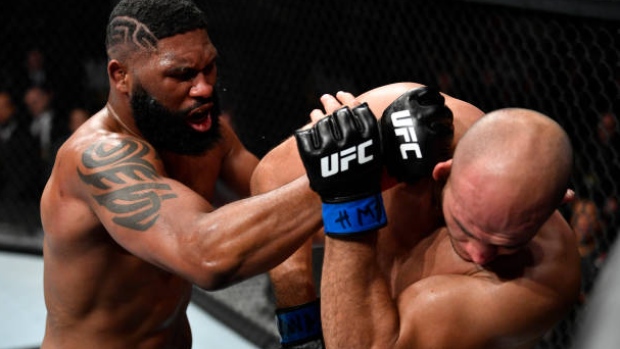 Blaydes makes a statement with win over former champion

Curtis Blaydes continued to flash his championship potential in the main event of UFC Fight Night in Raleigh, North Carolina on Saturday night.

In a bout with former heavyweight champion Junior dos Santos, Blaydes had trouble implementing his wrestling game-plan in the first round, but it was not needed in the second, where Blaydes flashed his improving striking and scored a TKO.

Since joining the UFC, Blaydes has won all of his bouts against opponents not named Francis Ngannou, whom Blaydes has lost to twice and has been the reason that Blaydes has yet to compete for a title.

Following the win, when interviewed by Daniel Cormier, coincidentally the heavyweight division’s top contender, Blaydes said that he hoped to be next in line for a title shot.

Michael Chiesa has had a turbulent tenure in the UFC. It started with his father passing away while he was a contestant on The Ultimate Fighter, a season that he would go on to win by defeating Al Iaquinta.

From there, Chiesa has been deprived of a big fight due to varying circumstances. He lost a fight to Jorge Masvidal when he submitted with just one second remaining in the second round and a doctor’s stoppage had him lose to Joe Lauzon in a fight that he had been winning up until that moment. He lost to Kevin Lee via submission when referee Mario Yamasaki stopped their bout, despite Chiesa not tapping and he had a bout scratched when he was injured by a dolly thrown through a window of the bus that he was on prior to UFC 233.

After a move to the welterweight division, where he won his first two fights, he was granted perhaps the biggest opportunity of his career, a co-main event bout against former lightweight champion Rafael dos Anjos.

Chiesa controlled dos Anjos in the first and third rounds, both of which he won clearly, en route to a unanimous decision victory.

The win could land Chiesa a spot in the division’s top-5 after being previously unranked.

In his post-fight interview, Chiesa called out former interim champion Colby Covington for a bout in July.

UFC Fight Night at PNC Arena in Raleigh had 14,533 attendees with an approximately $1.3 million gate.

The Performance of the Night bonuses were awarded to Alex Perez, who scored a first round submission victory over Jordan Espinosa and Herbert Burns, who made his UFC debut in impressive fashion, with a knee counter knockout over fellow newcomer Nate Landwehr.

The Fight of the Night bonus went to Brett Johns and Tony Gravely for their back and forth bantamweight bout that Johns ultimately won by third round submission.

UFC heavyweight champion Stipe Miocic has been sidelined with an eye injury that occurred during his rematch with then-champion Cormier.

As a result, Miocic and his team are proceeding carefully when it comes to his next title defence, which many expect will be a trilogy fight against Cormier.

"Until we are 100 percent confident -- or at least remotely confident -- his short- and long-term vision will be sustained, he will not be returning to competition,” Miocic’s agent Jim Walter told ESPN’s Marc Raimondi.

The most interesting comment made by Walter was that Miocic was looking to face an opponent that he has yet to defeat, which would exclude the division’s two top contenders in Cormier and Ngannou.

Walter also expressed interest in a boxing match with lineal heavyweight champion Tyson Fury, who has also mentioned Miocic as a prospective opponent.

Cormier has delayed his retirement, which he originally had planned for his 40th birthday last March, in order to hold a trilogy fight with Miocic.

Paige VanZant made her UFC debut at 20 years of age and after six bouts between her first bout in late 2014 and 2016, she has been plagued with recurring injuries, particularly her arm.

This week, VanZant announced that she had to pull out of her upcoming fight against Amanda Ribas after re-injuring her arm for the third time.

VanZant, who is on the last fight of her UFC contract and has been eager to explore free agency, especially with her husband Austin Vanderford competing in rival promotion Bellator.

With VanZant withdrawing from the bout, Canadian Randa Markos will replace her and face Ribas on March 14 in Brasilia, Brazil.