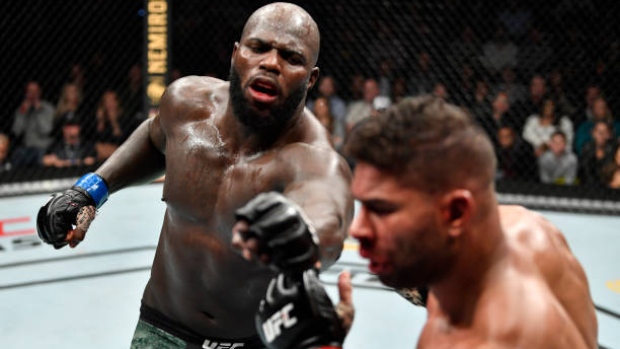 Jair Rozenstruik’s first UFC main event was not going his way. Veteran Alistair Overeem had a comfortable lead heading into the fifth and final round on the judges’ scorecards, but in a heavyweight fight, all it takes is one big shot and everything can change.

Rozenstruik landed that big shot in the final ten seconds of the fight, knocking Overeem to the ground and splitting his lip in the process and with just four seconds remaining, referee Dan Miragliotta stepped in to call a stop to the contest.

The win is tied for the third latest stoppage in UFC history.

Bryce Mitchell remains one of the most intriguing prospects in the UFC.

Entering his fight against fellow prospect Matt Sayles, the undefeated Mitchell continues to show that he is one of the most dangerous ground fighters in the featherweight division.

In the first round, Mitchell was able to secure one of the most rare submission finishes ever, trapping Sayles in a twister, one of the few submissions that targets the spine.

It was the second time in UFC history that a fighter has successfully executed the maneuvre. The first one was completed by “The Korean Zombie” Chan Sung Jung in March of 2011.

The Fight of the Night bonuses were awarded to Rob Font and Ricky Simon for their back and forth bantamweight bout that Font would win by unanimous decision.

Performance of the Night bonuses were awarded to Mitchell for his twister submission victory over Sayles and to Makhmud Muradov for his emphatic knockout win over Travis Smith.

When Dana White recently received courtside tickets to see his beloved Boston Celtics, he was seated next to a familiar face in boxing legend Floyd Mayweather.

While enjoying the game, White and Mayweather talked business and according to White have reached an agreement.

During an interview with Jim Rome last week, White said that he and Mayweather shook hands and that he plans to sit down with Mayweather’s manager Al Haymon and if everything goes according to plan, they would be “doing something” in October or November.

The details of this agreement have been vague at best and many questions regarding the terms of Mayweather’s return to combat sports remain to be answered.

Two prominent names in UFC lore are no longer with the promotion.

Former bantamweight champion Renan Barao, perhaps best known for having won 32 straight fights (with the exception of a single no contest) and two-time championship challenger Liz Carmouche have been released from the UFC.

Barao has lost five straight and seven of his last eight in one of the most shocking falls from grace in MMA history.

Carmouche’s release was more surprising, with her last fight being for the women’s flyweight championship against Valentina Shevchenko.

To make matters worse, Carmouche was in Washington doing promotional work for the UFC when she was notified of her release.

Carmouche competed in the first women’s fight in UFC history, facing Ronda Rousey in the inaugural women’s bantamweight championship bout. Carmouche lost to Rousey via submission in the first round but was able to secure a rear naked choke that nearly stopped Rousey earlier in the round.