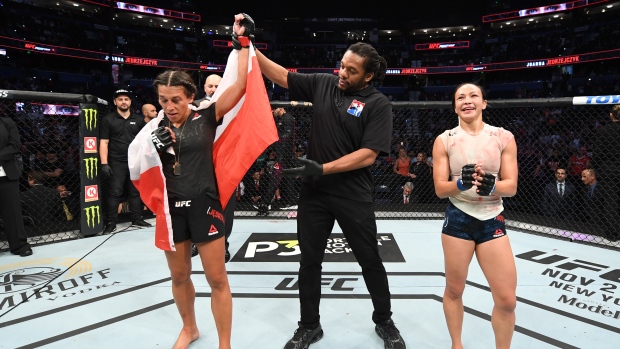 Joanna returns to form in victory over Waterson

Former UFC women’s strawweight champion Joanna Jędrzejczyk proved that she was still one of the best in the world after a masterclass performance against Michelle Waterson in the main event of UFC Fight Night in Tampa, Florida en route to a unanimous decision victory.

After something of a rough patch following a long championship reign that included five title defences where she went 1-3 with two losses to former champion Rose Namajunas and flyweight champion Valentine Shevchenko, Jędrzejczyk put that behind her by outclassing Waterson in all five rounds.

In this bout, Jędrzejczyk exhibited her trademark volume, landing 180 strikes over the course of five rounds, but with a new wrinkle as her accuracy was a notch above its normal level, especially when attacking the legs of Waterson, where she landed 78 of 90 attempts.

Earlier this week, Jędrzejczyk told TSN that her contract for this bout guaranteed her the next title shot against champion Weili Zhang if she were to be victorious.

Kron Gracie wanted a step up in competition and that’s exactly what he received when he faced veteran featherweight Cub Swanson.

When faced with an opponent with the last name Gracie, Swanson implemented the best strategy, which was to avoid the ground at all cost.

That strategy was successful, but Swanson may have gotten more than he bargained for, as Gracie landed 86 significant strikes over three rounds.

While Gracie’s volume was unexpected, volume is Swanson’s strong suit, as he landed 135 significant strikes of his own en route to a unanimous decision with all judges awarding him a 30-27 scorecard.

With the win, Swanson is now tied with featherweight champion Max Holloway for the most victories in the history of the UFC (and WEC) featherweight division with 16.

The Fight of the Night bonus went to the co-main event of Swanson and Gracie. Performance of the Night bonuses went to Niko Price, who landed a rare upkick knockout over James Vick and Marlon Vera, who earned a TKO victory over Andre Ewell.

According to eyewitnesses, police officers had to diffuse a situation involving First Round Management’s Abe Kawa and Dominance MMA’s Ali Abdelaziz.

In an ESPN report, Kawa alleges that Abdelaziz slapped him and a police spokesperson told ESPN that Las Vegas Metropolitan Police Department officers detained one of the subjects and issued them a citation.

Since then, many had speculated about whether it signaled a permanent move into the world of pro wrestling.

Velasquez confirmed that he was closing the chapter on his mixed martial arts career and with the blessing of UFC President Dana White, signed a multi-year contract with the WWE according to ESPN’s Marc Raimondi.

Velasquez, who defeated Brock Lesnar to capture the UFC heavyweight title at UFC 121 in 2010, will face Lesnar at the WWE’s Crown Jewel Event on October 31.

Despite his incredible UFC resume, injuries plagued Velasquez’s career, which has only allowed him to compete three times over the last six years.