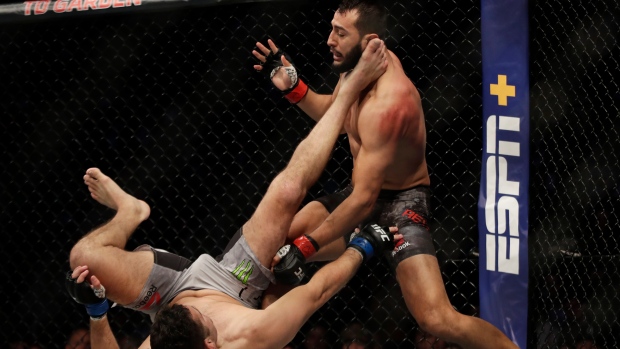 TSN's Aaron Bronsteter returns with his UFC Notebook to look at the Reyes-Weidman main event and all the other key bouts at UFC Fight Night at the TD Garden Friday.

Undefeated light heavyweight Dominick Reyes faced former UFC middleweight champion Chris Weidman in the main event of UFC Fight Night at the TD Garden in Boston and to say that he was up for the task would be an understatement.

Reyes dispatched Weidman in under two minutes with a perfectly placed straight left that dropped Weidman and allowed Reyes to finish soon thereafter with ground strikes.

Reyes improved to 12-0, with nine of those finishes coming in the first round.

Following the win, Reyes called out light heavyweight champion Jon Jones and after a statement win over the highly regarded Weidman, it is a strong possibility that Reyes will get the next shot at the title.

In the co-main event, Yair Rodriguez faced Jeremy Stephens in a bout that was re-booked less than a month after their main event bout in Mexico City ended in just 15 seconds due to an inadvertent eye poke.

Since that bout, emotions had flared between the two competitors after Rodriguez suggested that Stephens was looking for a way out after suffering the eye poke.

The first round was all Rodriguez, who flummoxed Stephens with a variety of kicks that made it difficult for him to get into a rhythm.

The second round was more of the same and Rodriguez dropped Stephens and tried to do whatever he could to finish the fight, but referee Kevin MacDonald allowed Stephens the opportunity to stay in the fight. Stephens was able to bounce back and have some success to end the round.

The third round was all Stephens, who had top control for much of the round and won the round from start to finish.

The judges awarded the fight to Rodriguez via unanimous decision with a score of 29-28 on all scorecards.

Following the bout, the two were cordial and shook hands in a show of sportsmanship.

Maycee Barber is the youngest female fighter on the UFC roster at just 21 years of age and faced Canadian Gillian Robertson, a tough up-and-coming fighter in her own right.

Both Barber and Robertson appeared on ESPN’s top-25 prospects under 25 at No. 6 and No. 12, respectively.

That assessment turned out to be the correct one as a relentless Barber threw heavy punches at Robertson until the referee decided that he had seen enough, stopping the bout just over three minutes into the first round.

According to MMA Junkie’s Mike Bohn, Barber became the first women’s flyweight in UFC history to score two knockout wins in the division that has been around for nearly two years.

Following the bout, Barber called out Paige VanZant, who she has been trying to line up a fight with for some time.

Former NFL All-Pro defensive end Greg Hardy competed in his fourth UFC bout of 2019 and it was not without controversy.

Between the second and third rounds, Hardy was given an inhaler, which he used after looking fatigued towards the end of the round.

On the broadcast, UFC vice-president of regulatory affairs Marc Ratner called the inhaler use illegal and the subject was a major part of the narrative for the remainder of the bout, which Hardy initially ended up winning via unanimous decision (29-28 on all cards).

Kevin Iole of Yahoo! Sports reported that Hardy had been given permission to use the inhaler, according to UFC president Dana White, and according to UFC vice-president of athlete health and performance Jeff Novitzky that the drugs contained in the inhaler were allowed in-competition up to a certain threshold that this amount likely would not have exceeded.

Following the event, Iole reported that Hardy was told by an inspector who did not have the authority to approve the inhaler that it was allowed, but did not receive formal commission approval and the bout was ruled a no contest.

The Fight of the Night bonus went to the co-main event of Rodriguez and Stephens. Performance of the Night bonuses went to Charles Rosa, who scored an armbar finish over Manny Bermudez and Reyes for his big knockout win over Weidman.