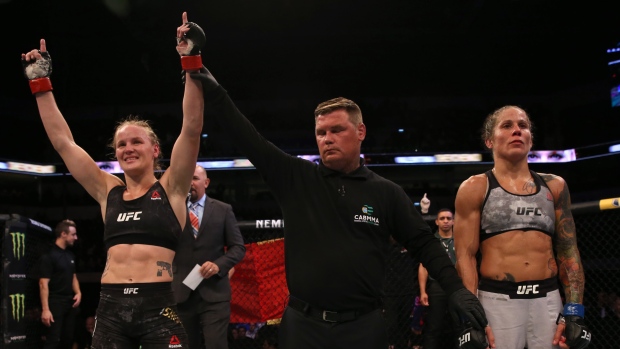 UFC Fight Night took place in Montevideo, Uruguay and was headlined by women’s flyweight champion Valentina Shevchenko and Liz Carmouche, who had previously beaten Shevchenko nearly nine years prior due a stoppage as a result of a cut.

The result was different the second time around as Shevchenko cruised to a dominant five-round unanimous decision victory over Carmouche, earning her second title defense, both of which took place in just over two months.

Following the fight, Shevchenko called for a rematch against women’s bantamweight and featherweight champion Amanda Nunes, who she has lost to twice in the UFC.

With Cris Cyborg likely leaving the UFC, the trilogy fight between Shevchenko and Nunes is likely the biggest female bout that the UFC could make at this time.

Luque and Perry deliver a classic

In the co-main event, welterweights Vicente Luque and Mike Perry put on a show.

The bout contained three rounds of back and forth action that took place mostly on the feet and either athlete could have won any of the three rounds due to how close they were.

When the final bell rang, Perry landed 87 significant strikes and Luque landed 84 and both fighters were worse for wear, especially Perry who suffered a badly broken nose.

Ultimately, the judges awarded a split decision victory to Luque, but both fighters raised their stock after the closely contested bout.

Gane and Vieira live up to the hype in debuts

Gane, who is mostly known for his professional muay thai and kickboxing experience, surprised many when he secured an arm triangle against Pessoa in the first round, earning his first professional submission victory.

The other well-known debutant was Rodolfo Vieira, a five-time jiu-jitsu world champion, who showcased his submission skills when he defeated Oskar Piechota via arm triangle in the second round.

Prior to the event, only seven debuting UFC fighters had earned a win via arm triangle, a feat that both Gane and Vieira accomplished on the same card.

UFC Fight Night at the Antel Arena in Montevideo, Uruguay drew a sold out crowd of 9,225 attendees for an undisclosed gate.

Performance of the Night bonuses went to Veronica Macedo and Volkan Oezdemir for their impressive victories. Macedo earned a first-round submission win, while Oezdemir scored a second round TKO.

The Fight of the Night bonus went to Luque and Perry for their exciting co-main event bout.

Jedrzejczyk, who last fought in December when she was defeated by Valentina Shevchenko for the then-vacant women’s flyweight championship, took some time off to regroup and after some time away, she will face Michelle Waterson in the main event of UFC Fight Night at Amalie Arena in Tampa, Florida on October 12.

Originally, the event was rumoured to take place in San Francisco, but was never announced and has subsequently been moved to Central Florida.

Jedrzejczyk is 1-3 in her last four after being undefeated as a professional prior and serving as one of the most dominant champions in UFC history.

Waterson is on a three-fight win streak and will face her toughest opponent to date when she faces the former champion.