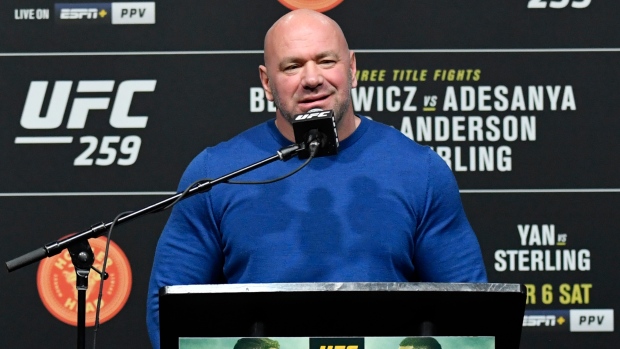 Five belts, four champions and three title fights – that’s what you’ll find in the headlining bouts of UFC 259 on Saturday. The rest of the card is full of emerging contenders, former title challengers and a former two-time champion.

UFC president Dana White is excited about the fights up and down Saturday's slate in Las Vegas.

Not surprisingly, one of the biggest stories heading into Saturday are the possibilities before middleweight champion Israel Adesanya. With a victory, he will become the first-ever undefeated two-division champion, the kind of win that can thrust you into the stratosphere of fame inside and outside of combat sports.

But White says you can’t forget about the defending champion in the main event because a win for Blachowicz on Saturday would also be a signature moment.

“I think it’s big either way for the light heavyweight division,” said White. “Obviously if a guy with the star power of an Israel Adesanya goes in and becomes the light heavyweight champion and holds two belts at the same time, it’s a big story. If Jan Blachowicz wins, he just stopped the undefeated middleweight champion from coming up and taking his title. The mainstream people might not know him now, they’re going to know who he is on Sunday.”

As he worked his way to the top of the middleweight division, Adesanya continued to engage in a war of words with former light heavyweight champion Jon Jones. White believes that if the middleweight champion is able to collect his second belt on Saturday, there could be a chance for a fight with Jones down the line and the possibility of a third title.

“His thing is, I don’t just want to hold two titles at the same time and defend them, stay undefeated and all this stuff, I want to be seen as one of the all-time greats,” said White. “He thinks after this fight happens with Stipe (Miocic) and Francis (Ngannou), he thinks that Jon Jones has a good chance to win and he wants to see how that thing plays out and then he moves up and fights Jon Jones at heavyweight, possibly for the title.”

The main event champion, meanwhile, will be an underdog for the 10th time in his last 12 fights. White believes this is Blachowicz’s chance to earn the type of victory that will change people’s minds about just how good he is in the Octagon.

“It’s funny because, the championship didn’t do it obviously,” said White. “You gotta get the right fight in the right place at the right time to get people either to notice you or to earn that respect that you deserve and Saturday night is his night, he’ll have the opportunity to do that. You know the guy’s got eight wins by KO, nine submissions, he can finish you anywhere the fight goes. Another thing that makes this fight interesting stylistically, he’s a former Muay Thai world champion taking on a former kickboxer, so stylistically this is a very fun fight and it’s a big fight for both of the guys in their careers.”

In Saturday’s co-main event, two-division champion Amanda Nunes will take an 11-fight winning streak into her featherweight title defence against Megan Anderson. Nunes will be one of the all-time biggest favourites in a UFC title fight, but White believe that Anderson possesses the type of power that can make things interesting.

“One of the things that makes this fight so fun, especially at ‘45, you’ve got Amanda Nunes, 13 first-round finishes and she hits like a truck, Megan Anderson has six wins by knockout, three by submission,” said White. “We see a lot of girls fight and the fights are technical and fast paced and entertaining and gritty. But with these two women? These two women have the power to knock other women unconscious, which is very rare in female fighting. It’s what makes this fight so fun. These are two powerful women that can finish fights.”

Things have not gotten any clearer in the UFC’s lightweight title picture since champion Khabib Nurmagomedov announced his retirement, but still remains the champion.

White is very excited about the possibilities at the top of the division.

“What’s interesting is when you talk about that, you’ve got Islam (Makhachev) who’s ranked No. 14, we won’t forget about Beneil (Dariush), he gets very upset, but he’s right he should be in the discussion,” said White.  “You’ve got Dariush at No. 9, you got (Rafael) dos Anjos, (Conor) McGregor, (Tony) Ferguson, (Michael) Chandler, (Charles) Oliveira, (Justin) Gaethje, (Dustin) Poirier. We’re going to make fights with all of these guys to determine who will be the next world champion.”

UFC fighter Khamzat Chimaev has had a tough battle with the after effects of COVID-19 since contracting the virus earlier this year. Chimaev appeared to announce his retirement this week, however, after speaking to him, White says the 26-year-old was just emotional from pushing himself too hard when he should still be trying to heal from the disease.

“We brought him out here to get him looked at, the doctors looked at him, they took care of him,” said White. “The problem is, the reason we love this guy is because he’s a savage. He got over a million followers on social media in a few weeks because as fight fans, this is the type of guy we like to watch fight and we like to follow.”

“The problem with a guy like this is, he has no patience for anything. He wants to fight every weekend, he believes that he could win the title today. He was on serious medication, he was supposed to be resting and relaxing, but he wasn’t. He was in the gym, training like an animal and he got sick again and he got effected by doing what he wasn’t supposed to be doing. Because things aren’t moving as fast as he would like them to, he got emotional and put that tweet out. To be honest with you, I don’t know where he’s at right now mentally or what he’s doing. We’ll have to see how this thing plays out.”​