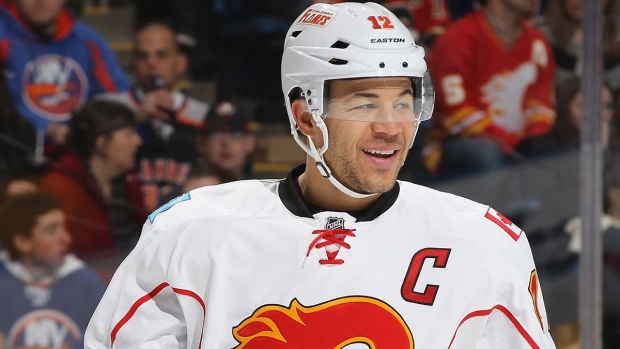 The knock came on Jarome Iginla’s hotel room door at quarter to six in the morning on cut day at Team Canada’s World Junior Championship training camp in New Brunswick.

The 18-year-old Iginla was summoned to meet coach Marcel Comeau.

Every teenager in the hotel was on edge, but Comeau quickly calmed Iginla’s nerves.

Comeau had a different message to deliver.

“You’ve been traded to Calgary,” Comeau told him.

Iginla put his elbows on his knees in despair.

“Why would Kamloops trade me to Calgary?” Iginla replied.

Comeau jumped in: “No, no! The Calgary Flames, not the Hitmen!”

Iginla breathed a sigh of relief. Overnight on Dec. 19, 1995, the Dallas Stars traded Iginla – their first-round pick in the previous June draft at No. 11 overall – to Calgary along with Corey Millen in exchange for Joe Nieuwendyk.

“I think that story perfectly encapsulates who Jarome Iginla is,” said TSN’s Craig Button, who was part of the Dallas management team that traded Iginla to Calgary, then later became the Flames’ GM. “He wasn’t even thinking about the NHL. He is so unassuming.”

Twenty-seven years later, it’s fair to assume Iginla is a Hall of Famer. The Hall’s 18-member selection committee should cement him as a first-ballot entry with a rubber stamp during Wednesday’s virtual deliberation.

Iginla, who turns 43 next week, finished his NHL career with an even 1,300 points – 625 goals and 675 assists. He was the NHL’s dominant power forward for more than a decade, notching two 50-plus goal seasons, with five campaigns at better than a point per game. He was also the heartbeat of the Calgary Flames.

For being such a prolific goal scorer, Iginla will perhaps best be remembered for assisting on the Golden Goal at the Vancouver Olympics in 2010, which is in the conversation for the most famous goal in hockey history. The sound of Sidney Crosby shouting “Iggy!” is seared on the brain of anyone who watched.

He also scored twice in the gold-medal game at the 2002 Winter Games in Salt Lake City, helping Canada beat the U.S. 5-2 to capture the country’s first men’s Olympic hockey gold in 50 years.

“Any way you want to play,” is a mantra that set Iginla apart, in the mind of Button.

“There was no area of the game where he couldn’t make an impact. And facing the biggest challenges, like cream, he always rose to the top.”

There are only two omissions on Iginla’s resume: a Stanley Cup and the Hart Trophy. He came painstakingly close to both.

His Flames fell to the Tampa Bay Lightning in Game 7 of the Stanley Cup Final in 2004. He lost a tiebreaker to Jose Theodore in Hart Trophy voting in 2001-02; Iginla and Theodore improbably finished with the same number of voting points, but Theodore received three more first-place votes to take the trophy.

“The thing about Iggy is that his outlook is always the most positive outlook,” said TSN’s Jamie McLennan, a former teammate who remains one of Iginla’s closest friends in the game. “I remember him not scoring in eight games or so. You’d wake up and the headlines in the Calgary Sun would be ‘What’s Wrong With Iggy?’ or ‘Should the Flames trade Iggy?’ and I would actually be scared for him.

“You’d see him at the rink and ask him about it. He would say, ‘You wait until I start scoring, it’s going to be unreal.’ He embraced every challenge.”

Iginla was the ultimate competitor. His toe-to-toe fight with opposing captain Vincent Lecavalier of the Lightning to kick off Game 3 of the Stanley Cup Final at the Saddledome in 2004 was the stuff of legend. McLennan called him one of the best trash-talkers to play the game.

“Because he could always back it up,” McLennan said.

Off the ice, Iginla’s leadership also set him apart. He won both the King Clancy Memorial Trophy for humanitarian contribution and the Mark Messier Leadership Award for on-ice leadership, motivation of team members and dedication to charitable causes.

Not every athlete’s on-camera personality translates into real life, but McLennan said with Iginla – with that perfect smile – what you see is exactly what you get.

“He is very quietly a generous person, he doesn’t need a camera in front of him,” McLennan said. “He’s the opposite. He doesn’t want his name attached.”

McLennan recalled the time at the 2002 Salt Lake City Olympics that Iginla ran into four guys from Calgary at a restaurant. They drove down on a whim, without a hotel room and no tickets, and planned to sleep in their car. They didn’t ask Iginla for anything other than a photograph. Iginla casually asked for their number, gave them a ‘good luck’ and ‘be well’ and then left.

“They later got a phone call saying that Iggy had arranged a hotel room for them and tickets, in the middle of the Olympics,” McLennan said. “He didn’t want them to tell anybody, but they couldn’t help not sharing the story.”

No matter the success and pile of achievements, Iginla never forgot his St. Albert, Alta., roots and the sacrifices his grandfather, Rick, made taking him to the rink. The kids Iginla grew up with remain his best friends to this day.

The two-time Olympic gold medallist has made an impact on the NHL and nearly everyone he has met.

“You realize pretty quickly how special he is,” McLennan said. “He is very thoughtful, level-headed - and he thinks ‘How dare someone act a certain way?’ He pays attention. I think that’s rubbed off on all of us as friends. He really is the gold standard.”