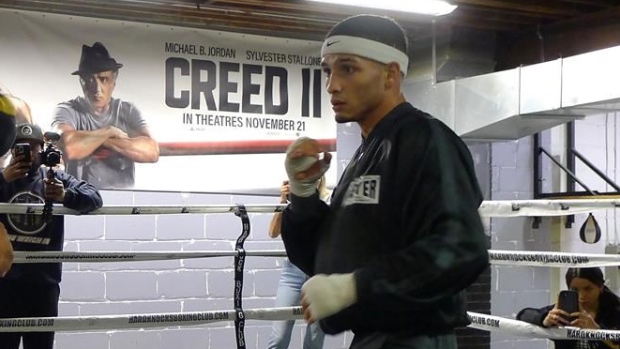 TORONTO — Bryan (El Latino) Acosta poured it on in the 10th round to stop fellow Mexican Benito Sanchez Garcia on Thursday and win the WBC Continental Americas super-featherweight title.

Acosta (17-0-0) was in control for most of the fight and came out in the final round looking for the finish, punishing Garcia (15-6-2) on the ropes. And he kept punching until referee Mark Simmons stepped in 97 seconds into the final round.

The Cinco de Mayo card at the Rebel Entertainment Complex, was the first under a new broadcast agreement between DAZN and Toronto promoter Lee Baxter.

Garcia was game but was unable to find a way to disrupt the well-organized Acosta, who made a point in the first round by flooring Garcia with a left hook.

Acosta was more aggressive in the second round, looking to connect with Garcia's body. And he kept coming forward in the third, bobbing and weaving as Garcia tried to mount some offence.

Acosta went on the attack as the fight wore on, stalking Garcia and connecting with the right in the sixth round. Garcia responded in the seventh, coming forward but had difficulty penetrating Acosta's defence.

Acosta changed stances to make life more difficult for his opponent. And Garcia seemed frustrated as the fight progressed, unable to get to Acosta.

A confident Acosta attacked in the ninth, coming forward with combinations. And he finished it in the 10th.

The 23-year-old from Hermosillo, Mexico, won his Canadian debut in March with a unanimous decision over Mexican Lamberto Macias.

This report by The Canadian Press was first published May 5, 2022