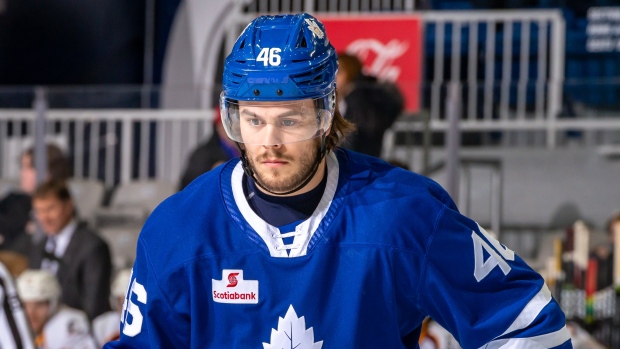 When the American Hockey League paused its season in March, the Toronto  Marlies sat nine points back of a playoff spot with 15 games left. The Maple Leafs' farm team harboured hopes of making a late charge, but won't get that chance. On Monday, the AHL officially announced the rest of the season will be cancelled due to the COVID-19 pandemic.

So, what to make of the 2019-20 Marlies season? It featured plenty of twists and turns including a coaching change with Greg Moore taking over for the promoted Sheldon Keefe in December. There was a lot of personnel turnover as well as the Leafs dealt with a string of injuries (199 man games lost) requiring near constant call-ups.

​Leafs assistant general manager Laurence Gilman, who serves as general manager of the Marlies, and Moore spoke to reporters via a conference call on Monday. Here are five highlights from their 30-minute session with the media.

1. An 'undefined number' of Marlies players are on standby if the National Hockey League season resumes.

"We made a decision with respect to an undefined number of our players and we conducted exit interviews with the rest," Gilman said. "With respect to the players who​ conceivably could play depth roles for the Leafs, they've been informed that they are essentially on standby like the rest of our NHL players."

As for the exit interviews, Gilman said they weren't all that different from regular years with players being told what they did well and where they can improve. There was one additional note.

"One of the messages that we imparted is, 'There will be hockey again at some point and your job, as a player, is to get ready for training camp whenever that's going to be,'" Gilman said. "Every player that we sent off has an individualized workout [program] so that they can work on whatever it is they need to work on."

Many from across the #AHL admit it was disappointing to hear the news that the league was cancelling the remainder of the season and playoffs, also understand that it's the best thing to do considering all of the circumstances: https://t.co/rEqBT5tHQW#TSNHockey pic.twitter.com/V7lPzGQBxl

2. After taking a 'tremendous step' in his development, Timothy Liljegren is ready for the NHL.

Right-shot defenceman Timothy Liljegren was among the stand-out players for the Marlies this season and earned an 11-game look in the NHL.

"I really felt that his game took a tremendous step this season," said Gilman. "He obviously has very good puck skills, he transports the puck very well, he skates very well, he has a good shot, but I think what he worked on the most this year ... was how he processed the game, how he thought it, his decision making going forward."

With Tyson Barrie and Cody Ceci, both righties, likely to depart in free agency, the Leafs need options on their blueline next season and the belief is that Liljegren can help fill the void in some capacity.

"I believe that Timothy Liljegren is ready to become an NHL player, whatever level that will be," Gilman said. "I will be surprised if he doesn't play in the top seven or eight with the Toronto Maple Leafs next year. He's got to hold up his end of the bargain, but in terms of the development that he's had in the past 12 months I think it's been tremendous."

#MapleLeafs defenceman Timothy Liljegren joins @markhmasters to discuss his new daily routine during the pandemic and his first season in the #NHL: https://t.co/0v0gVeTHQ1#TSNHockey pic.twitter.com/AVi3x32O79

While Liljegren is on the rise, the outlook isn't as rosy for Bracco. The 5-foot-11 winger hasn't played since Feb. 1 after missing time for personal reasons.

"Jeremy had an interesting season," said Gilman. "We conducted an exit interview with him as we did with many of the other players. We're going to assess ... all our players going forward and that decision and that analysis hasn't yet occurred at this point in time. This season just concluded this morning."

After finishing second in AHL scoring with 79 points in 75 games last year, Bracco produced 34 points in 44 games this season.

Bracco did make a good first impression on Moore, who chuckled when asked what the 23-year-old is like off the ice.

"The reason I kind of giggle is because he's such a fun-loving guy," Moore said. "He brings so much energy to the room, to the rink, teammates love being around him, he definitely brings the fun and everyone enjoys working with him."

Bracco, Toronto's second-round pick in 2015, has yet to play a game in the NHL.

4. Gilman is comfortable with the goalie pipeline.

Kasimir Kaskisuo made his NHL debut this season, but got shelled for six goals in his lone start in Pittsburgh back on Nov. 16. The 26-yea​r-old Finn finished the AHL season 14-9-2 with a .909 save percentage. Meanwhile, Joseph Woll struggled to find consistency in his first professional season posting an 11-16-3 record with an .880 save percentage.

During Woll's exit interview, Gilman said he reminded the 21-year-old Boston College product that it takes longer for goalies to develop than position players.

"We think we have a very good and up-and-coming goaltender in Joe Woll and we've been very happy with Kasimir Kaskisuo [who took us] to Game 6 of the Conference Final last year," said Gilman. "By and large we're happy with what we have in the pipeline but, like any other franchise, you can never have enough goaltending, it's like pitchers in baseball."

Gilman also mentioned that Ian Scott remains in the equation. The 21-year-old missed the season after undergoing hip surgery.

Leafs starter Frederik Andersen has one more year remaining on his current deal while the newly acquired Jack Campbell is under contract for two more seasons.

Maple Leafs prospect Joseph Woll has endured plenty of highs and lows in his first pro season, but he knows it will only make him better.

He joins @markhmasters to discuss his year and how he's staying prepared: https://t.co/fFidLzgbNB #TSNHockey pic.twitter.com/k3uVdLRPJP

5. Kristians Rubins and Adam Brooks are on the rise.

Asked who has stood out from a developmental perspective, Moore is quick to mention 22-year-old defenceman Kristians Rubins.

"I was really impressed with his continued thirst for education and learning and growing as a person," said Moore, "how good of a teammate he was and ... how much he improved from the beginning of the season to the season pause. He really added a lot of different layers to his game."

Moore also highlighted the contributions of 24-year-old forward Adam Brooks, who made his NHL debut in December, playing seven games with the Leafs.

"He obviously got his first taste of the National Hockey League this year and it was really impressive to see him thrive within those opportunities," Moore said. "He definitely took advantage of his time on the ice and his time up there and then when he came back you could also see a level of confidence that he gained from that experience."