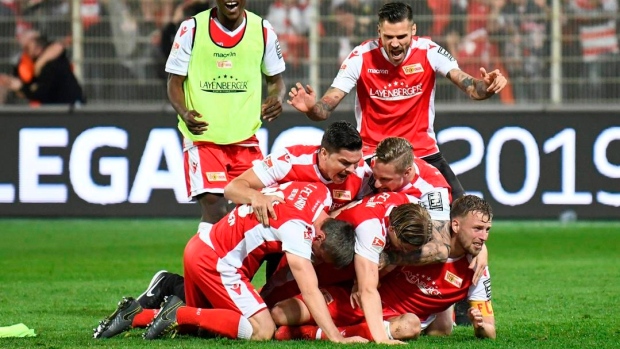 BERLIN — Sebastian Andersson scored twice as promoted Union Berlin beat Cologne 2-0 and climbed to 10th with its fourth straight home win in the Bundesliga on Sunday.

The Swedish striker struck in both halves to give Union its sixth league win overall, and offer hope to its fans — who sang “Jingle Bells” in the stadium — that their team can survive the first season in the Bundesliga.

Union is seven points clear of the relegation zone after 14 games, and closer in points to defending champion Bayern Munich than to teams struggling at the bottom.

Cologne, which was fortunate not to lose by more at Union’s sold-out Stadion An der Alten Försterei, remains in trouble in its third game under new coach Markus Gisdol. Cologne hasn’t won a game since beating Paderborn 3-0 on Oct. 20 and is now bottom.

“We’re not scoring the goals and we’re conceding easily. That has to change, and quick,” said Cologne sporting director Horst Heldt, who joined with Gisdol three weeks ago.

Both sides found it hard to create chances in a scrappy opening until Cologne midfielder Birger Verstraete tested Rafal Gikiewicz with a dangerous free kick after 25 minutes.

Cologne counterpart Timo Horn did well to save Andersson’s shot at the other end, but he was powerless to stop the Swede from scoring off the resulting corner in the 33rd.

Union captain Christopher Trimmel sent the ball into the centre where Andersson powered in a header.

There were groans around the stadium after the home side failed to make the most of a counterattack when four Union players faced only two Cologne defenders. Sebastian Polter played the ball too far ahead of Marcus Ingvartsen when shooting would have been a better option.

However, Andersson grabbed his second two minutes after the break when he rounded Horn and eluded one defender before shooting. Sebastiaan Bornauw cleared off the line but goal-line technology confirmed the goal.

Sven Michel scored in the last minute for Paderborn to grab a 1-0 win at Werder Bremen in the late game.

It was only Paderborn’s second win and it lifted the promoted side ahead of last-place Cologne on goal difference.