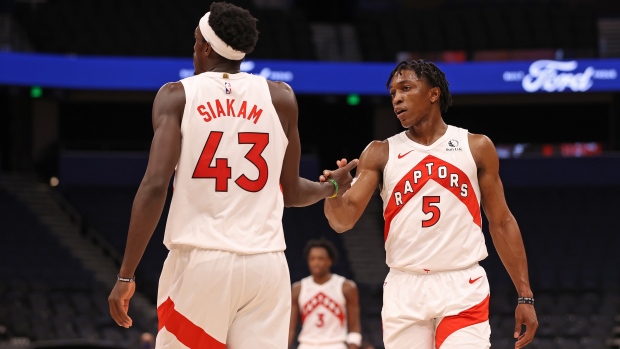 On a night in which Toronto took 88 shots – 50 of them coming from beyond the arc – and scored 111 points, the defensive-minded forwards combined to score just nine of them on a mere five field goal attempts. However, logging 21 and 15 minutes off the bench, respectively, Johnson and Watanabe played crucial roles in Thursday’s victory over Charlotte – a win that the now 3-8 Raptors desperately needed.

When Johnson checked in late in the first quarter, the Raptors were trailing by one and the defence was bleeding points. It was a lethargic start, especially against a tired and undermanned Hornets club in the second leg of a back-to-back and missing its best player, the injured Gordon Hayward.

The momentum shifted in the second quarter, when a unit that featured Johnson, Watanabe, Norman Powell, the red-hot Chris Boucher, and the steadying presence of Kyle Lowry sparked a 22-6 run and put the Raptors up by 15 points.

It seemed like Boucher couldn’t miss a shot, Powell was getting to the rim and starting to resemble his old self, and Lowry was doing typical Lowry things, but the energy, hustle, and unsung contributions of Johnson and Watanabe really made that lineup pop.

Early in the frame, Watanabe cut off the driving Devonte’ Graham at the free throw line, he used his positioning and excellent footwork to stay in front of the quicker guard, and led him into Boucher, who was credited with the block. Then, when the ball bounced to Bismack Biyombo, Watanabe’s shot contest forced the former Raptor into a travel.

A few minutes later, Watanabe’s hard closeout on Graham took a corner-three away from the Hornets sharpshooter. On the same possession, Watanabe recovered, met Biyombo at the rim, and blocked his shot.

Meanwhile, Johnson battled with the always-physical Biyombo in the paint and seamlessly switched onto, and locked down, Charlotte’s perimeter players. By halftime, Toronto’s bench had scored 34 points – more than they had totalled in seven of the team’s first 10 contests.

“They did a great job of just playing hard,” Nick Nurse said, following his club’s 111-108 win. “They were keeping balls alive, they were jarring balls loose on the defensive end, they were limiting them to one shot.”

It was a reminder of why Nurse has been entrusting them with important rotation minutes of late. Neither player was his in his plans when the season began last month. Johnson was sparingly used last season – his first with Toronto – and Watanabe snagged a two-way contract in training camp, barely making the roster. But when you’re losing, the plan can change in a hurry.

Matt Thomas and Terence Davis figured to play prominent roles coming off the bench this year, and while those guys offer a higher and more dynamic offensive ceiling, both players have fallen out of favour on account of their early-season defensive lapses.

Nurse has cycled through his reserves, turning to just about everybody on his bench and looking for a few guys that will bring what he’s been looking for. The mandate is a defensive focus and consistent effort and energy. In addition to Boucher, who had another big night with 25 points and 10 rebounds against Charlotte, Nurse seems to have settled on Johnson and Watanabe. Neither player is going to give you much in terms of point production, but they rarely go outside their job description, and you can almost always count on them to deliver within the context of their role.

“I don’t wanna show I can do more [than what they’re asking me to do],” Johnson said on Wednesday. “I’m a professional athlete, I play for money. This is a performance-based thing, this is not AAU, this is not YMCA, you play on your performance. If I’m not playing good enough, that’s probably why I wasn’t playing [last season]. So, for me, I’m not really into anything spectacular, I’m just into going in every day, working extremely hard, and letting my work do the talking.”

A star at the University of Arizona and former Pistons lottery pick, Johnson has always looked the part – he has talent and an NBA body, but he’s never found a role that’s suited him. After four forgettable seasons, mostly with Detroit, he signed with the Raptors in the summer of 2019. Still just 23 at the time, he hoped Toronto’s famed player development program could help him take the next step.

He spent most of last season buried on the bench, but started to turn heads around the organization when he finally got an opportunity to play in the bubble. When they were eliminated in the Game 7 loss to Boston, and players went their separate ways – with many of them going to train in Los Angeles or Las Vegas – Johnson went back to Toronto, where he spent the entire off-season working out under the guidance of the Raptors’ staff.

“I really, really, really, really, enjoy playing for this organization, top to bottom,” he said. “And for me and my development, even though some people would say I didn’t get better or whatever they think about me, I thought I got better here. I thought the instruction I was getting was positive and instructive for me. I had a goal in mind to make the rotation and get minutes, and I’m still striving for that goal.”

Johnson has played at least 10 minutes in seven of the last nine games – something he did three times all of last season, and just once before the restart. He’s logged at least 20 minutes in consecutive contests for the first time since the end of the 2018-19 campaign, when he was with New Orleans.

What Nurse likes about him, in addition to some of the intangibles he brings, is his size. Although his natural position is at the three, the Raptors have been using him as more of a four. And, as Nurse foreshadowed earlier in the week, he even played some small-ball five to close the third quarter on Thursday. He didn’t look out of place, and held his own against the bigger Biyombo.

That could be an interesting option going forward, given the team’s guard-heavy roster and their continued lack of production from the centre position – Alex Len missed Thursday’s game for personal reasons and Aron Baynes reclaimed his starting job, but played eight underwhelming minutes.

“I’m not a small person, I’m not light in the butt,” said Johnson – giving us an early favourite for quote of the season – who said he last played centre in his freshmen year of high school. “I don’t feel like I have any problems with people down low that seem taller than me or bigger than me. I think most of the time I weigh just as much as everybody else other than like Zion [Williamson], or somebody like that.”

Watanabe, who spent his first couple NBA seasons in the Grizzlies system, has been a quick study. Although he’s still getting comfortable with the Raptors’ schemes, his motor and defensive acumen have helped expedite the transition. He said he’s always prioritized defence, and it’s paying dividends now.

“In college, I was a really good defender,” said the 26-year-old, who scored three points and grabbed four rebounds against Charlotte. “Especially now, my job is not gonna be to score 20, 30 points a night. My job is gonna be to go out there with tons of energy, be the first one to dive on the floor, grab rebounds, grab 50-50 balls, stuff like that. So that's my priority. I think that's what I did tonight, and in a way, I was able to help the team. I'm very happy what I was able to do tonight.”

Thursday’s game was also a window into the potential downside of relying too heavily on players with limited offensive toolboxes. Although Johnson did knock down a couple wide-open threes, with Charlotte’s zone defence practically daring him to take the jumper, the Hornets were wise to sag off of Toronto’s reluctant shooters. Johnson is a 29 per cent career three-point shooter, and while the sample size is small, Watanabe has hit just eight of his 31 attempts as a pro.

In spite of their successful first stint, Charlotte’s zone stymied Toronto’s bench unit in the second half and chased Johnson and Watanabe off the floor early in the fourth quarter, as the Raptors’ offence – which scored 99 points through 36 minutes – went ice cold and the Hornets nearly stole the game away.

If the first-half run served as justification for Nurse’s decision to roll with Johnson and Watanabe over guys like Thomas and Davis, who some fans have been clamouring to see, the second-half scoring drought presented the other side of the argument. Still, given the option between offence and defence, Nurse has proven he’ll choose the latter nine times out of 10.

“That’s all I'm really asking, is for him to go out and play hard and play solid,” Nurse said of Johnson. “And then anything else he gives us as far as scoring or knocking in a shot or whatever is kind of gravy, but we do need to have him make some hustle plays, we do need that bigger body to guard some of the bigger wings, or the stronger fours, or whatever… I just hope he can grow in that role a little bit minutes-wise, if he stays solid, and I think he’s been very useful for us in these last few games.”​