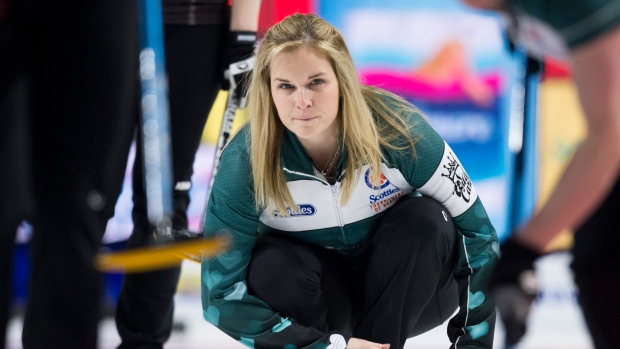 Uncertainty will be a prevalent theme at the Canadian women's curling championship.

The 2021 edition of the Scotties Tournament of Hearts, which starts Friday in Calgary, will be a one-of-a-kind playdown that kicks off a run of six straight bonspiels at the Markin MacPhail Centre.

Most of the top Canadian teams are in the field but performance levels are difficult to predict given the many challenges over the last year.

Some teams have yet to play a competitive end this season. Others will be playing with new teammates for the first time. Limitations in the unusual bubble setting will test the discipline of all involved.

Normally season results make it easy to peg favourites. But given the unusual dynamics in play this time around, the 18-team event is essentially one big guessing game.

"There definitely could be a few upsets happening," said Canada skip Kerri Einarson. "Basically every team is in the same boat. There are some teams in different provinces that have access to ice. For a few of us, we don't have that option."

Never have pre-competition practice sessions — scheduled to begin Thursday morning — been so important.

A few bonspiels were completed early in the season but there has been a tour event void in recent months. Pandemic restrictions, travel issues and curling club closures left many players hamstrung.

"They're fresh and they're going to want to get out there," said curling broadcaster Cheryl Bernard. "It's like thoroughbreds that have been in the barn all winter and they finally get a chance to play and run.

"I think it's going to be a neat opportunity for all of us to see these players fresh."

Some curlers resorted to throwing stones on frozen lakes in recent weeks just to get some slides in.

"It'll be tough that way, not having been able to get in those reps that we normally have," Einarson said in a recent interview. "We've usually played over 60 games by now, so that will be a change."

Unlike a regular campaign where teams can find their rhythm at lower-level competitions, curlers will go right into the deep end at the Hearts.

Early results are critical in order to make the cut for the championship pool.

"I think you're still going to get the teams going in that have the experience on paper, but I'm sure they're very nervous too (because they) haven't been able to train and play like (normal)," said Sherry Middaugh, who will coach Team Wild Card No. 1.

"So I think this year is probably the year for upsets or things that normally wouldn't happen, which I think is exciting too for the sport."

Three wild-card teams are in the expanded field this year and all are based in Manitoba.

Chelsea Carey is the substitute skip for Tracy Fleury on the first wild-card team. Fleury is staying home with her young daughter, who is receiving treatment for a medical condition.

Carey, a free agent this season, is a two-time national champion.

"You don't want to settle and we know we're not settling with Chelsea," Middaugh said. "She's going to fit in perfectly."

A full round-robin will be played within the nine-team pools. The top four teams in each pool will advance to the two-day championship pool with records carried forward.

Einarson, Ontario's Rachel Homan and Alberta's Laura Walker are the top three seeds in Pool A. Team Wild Card No. 1 tops the Pool B seed list ahead of Manitoba's Jennifer Jones and Corryn Brown of B.C.

Zacharias and Peterson are in Pool A along with Kerry Galusha of the Northwest Territories, Nova Scotia's Jill Brothers, Northern Ontario's Krysta Burns and Yukon's Laura Eby.

The Page playoff will not be used this year. Instead only three teams will make the playoffs.

The second- and third-place teams will meet in an afternoon semifinal on Feb. 28 with the winner to face the first-place team in the final that night.

Einarson's Canada rink is the betting favourite to win at 1.75-1, according to Bodog odds.

This report by The Canadian Press was first published Feb. 15, 2021.