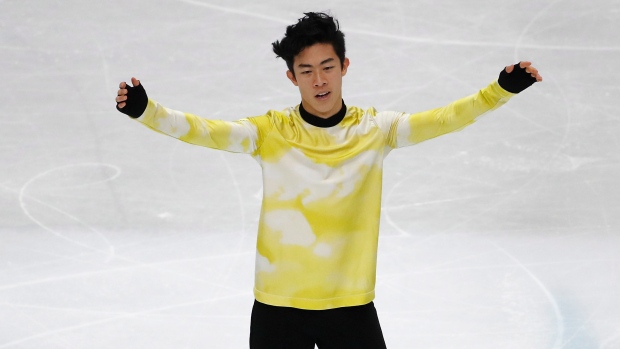 Chen and Hanyu both landed five quadruple jumps in their free skates, a number that was almost unimaginable in skating even a few years ago, but Chen skated his program clean to score a total 335.20 points, while Hanyu made crucial errors.

The only difficult moment for Chen came on a combination when he improvised a triple Salchow instead of a flip after coming off his previous jump in a less-than-ideal position.

Chen became only the second men's skater to win the Grand Prix Finals three times in a row. The only other skater to have done that is Hanyu, who won four straight competitions from 2013 through 2016.

Hanyu dropped points late in the program with just a single Axel instead of a triple. The Japanese skater crouched on the ice at the end of his skate and looked exhausted, scoring 291.43.

It was the second consecutive skate with uncharacteristic errors from Hanyu, who missed a combination in Friday's short program.

Skating on his 25th birthday, Hanyu landed five quads in a program for the first time, and paid tribute to Chen, saying the competitiveness between them was driving the sport forward.

“Sometimes somebody says (if) figure skating is a sport or not, and I'm really feeling it's a sport in here," Hanyu said.

Chen returned the compliment, saying: “It's an amazing honour to be able to compete against Yuzuru. I've looked up to him, idolized him for years and even now he's someone who is truly like a skating god to me.”

Skating last, Chen had a long wait to take to the ice while the rink was cleared of stuffed toys thrown by Hanyu's legion of passionate fans.

Kevin Aymoz took bronze to become the first French man to win a medal in the Grand Prix Finals since Brian Joubert won 13 years ago.

Aymoz landed a quad toeloop-triple toeloop combination, but fell on another quad toeloop, as he scored 275.63. He and his coach were in tears when they heard the score.

Defending Grand Prix Final champions Gabriella Papadakis and Guillaume Cizeron of France won the gold medal with 219.85 points. Madison Chock and Evan Bates of the U.S. were second at 210.68 and their compatriots Madison Hubbell and Zachary Donohue were third at 207.93.

Gilles and Poirier, who collected a gold and silver on the circuit this season, posted the fourth best free dance to move from sixth after the rhythm dance to fifth overall with 203.50.

"We both know we've got a strong free dance and everyone enjoys watching it," said Gilles. "We owed it to ourselves not to let a score define who we are at a competition. We need to make sure we are doing our job and our best in every program.

"We showed maturity and confidence today."

Canada's other entry Kirsten Moore-Towers of St.Catharines, Ont., and Michael Marinaro of Sarnia, Ont., were fifth in pairs on Saturday.