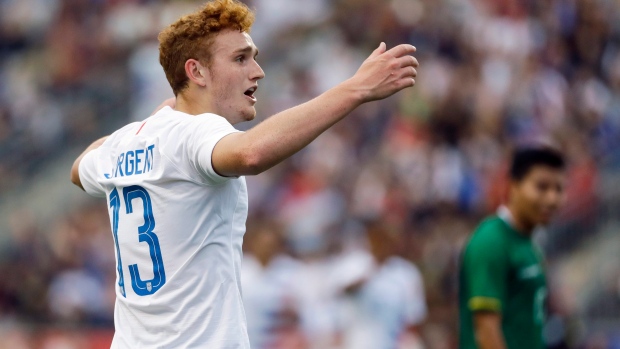 BERLIN — Josh Sargent helped Werder Bremen end Eintracht Frankfurt’s unbeaten start to the year with the winning goal in a bad-tempered 2-1 defeat for the Bundesliga’s in-form team on Friday.

The United States forward scored one goal, had another ruled out, and saw another goal he set up ruled out on a busy night for the video referee.

Sargent’s winner in the 62nd minute was given by VAR despite looking offside in TV replays. Sargent didn’t celebrate after scoring as he seemed to believe he was just offside for Maximilian Eggestein’s pass.

But the goal was awarded, giving Sargent his third score in the Bundesliga and fifth overall this season. He previously scored at Frankfurt on Oct. 31 and at Hertha Berlin on Jan. 23, but had not at home in any competition since last season’s Bundesliga finale in June against Cologne.

Sargent’s goal meant the end of Frankfurt’s 11-game unbeaten run in the league since Dec. 11. Frankfurt previously won eight from its nine Bundesliga games in 2021 with the only blip a draw at Freiburg.

“It's always such a fight and emotional against Bremen. In the end it was much too much,” Frankfurt captain Makoto Hasebe said.

Frankfurt's top scorer, André Silva, missed last weekend’s win over Bayern Munich with an injury picked up in training, but it didn’t take long for the Portuguese striker to get going with the visitors’ opening goal in the ninth minute.

Filip Kostic, who is so important to Frankfurt’s attacking threat, crossed after a corner for Silva to head in his 19th goal of the season off the far post.

Bremen fought back. Sargent had a goal ruled out for offside in the buildup and it served as encouragement for the confidence-hit home team. Bremen hadn’t scored in two games.

Theodor Gebre Selassie equalized just after the break, but the increasingly agitated Kohfeldt’s patience was tested again with another offside call. The Bremen coach was relieved when a VAR check confirmed his captain was onside for Rashica’s defence-splitting pass.

The American forward set up Romano Schmid to make it 3-1 but again the offside flag was raised. This time VAR ruled in Frankfurt’s favour, though it was another close call.

Frankfurt remained fourth in the last qualification place for the Champions League and Bremen pulled eight points clear of the relegation zone.