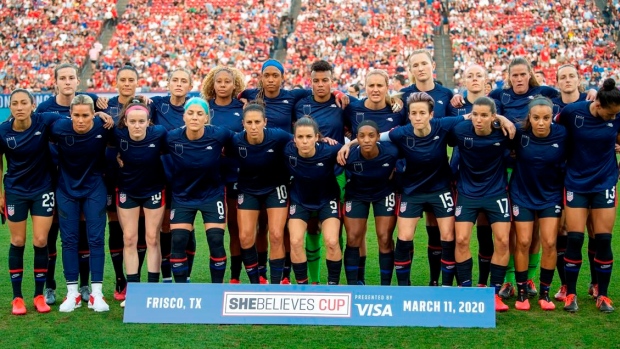 US women soccer , The Canadian Press

FRISCO, Texas — The U.S. women's national team wore its warmup jerseys inside out in an apparent protest before playing Japan Wednesday night in the SheBelieves Cup.

The team is in the midst of an ongoing legal dispute with U.S. Soccer over gender discrimination which became heated this week when the federation filed court documents claiming that the women are less skilled and have less demanding roles than the men on its national teams.

The players wore their warmup jerseys inside out during the national anthem. The move hid the national team crest but four stars — for the team's four World Cup victories — were still visible.

Players filed the gender discrimination lawsuit in federal court in Los Angeles last year, claiming they are paid less than their counterparts on the men's national team. The women are seeking more than $66 million in damages under the Equal Pay Act and the Civil Rights Act of 1964, and a trial is scheduled for May 5.