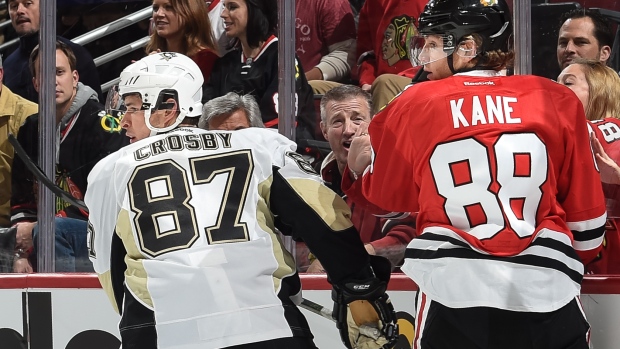 The NHL premium player stock market has been hit as hard as world financial markets this season.

Each year, the pre-season TSN Top 50 NHL Players list ranks the projected best players in the league, reflecting the rising and falling values of individual players. Some blue-chip stocks annually remain the same - Sidney Crosby has been ranked No. 1 six straight years – and others – for example, Duncan Keith ranked as high as No. 5 and low as No. 49 – endure the vicisitudes of the hockey marketplace.

But this year, even Crosby hasn’t been immune to changing times.

While Patrick Kane has rocketed up the ranking, earning 10 of 10 No. 1 votes in the All-Star Break Top 50 survey of TSN hockey experts, Crosby plummeted to No. 14. Of course Crosby has bounced back from a horrible start and entered the All-Star Break – which he actually gets because he wasn’t invited to the game - on a 7-game point streak.

But that has been no match for Kane, who fashioned a 26-game point streak during the first half and could be the first player to lead scoring by more than 20 points since the estimable Jaromir Jagr in 1998-99.

Meanwhile, Crosby, Chicago centre Jonathan Toews (No. 2 to 14) and Islanders’ centre John Tavares (No. 4 to 40) have dropped. Most surprising is Tavares’ descent. At age 25, he should still be on the ascent. Instead, the captain has just 34 points in 44 games or .77 points per game, a significant falloff from last year’s 1.05 mark.

Pre-season No. 3 Carey Price dropped to No. 28 in the All-Star Break poll, but that is, in fact, a high compliment to the Montreal goalie who earned a place in the top 50 despite playing just 12 games.

Only the unstoppable Alex Ovechkin defied the top 5 trend among skaters. The newly minted 500-goal scorer actually rose to No. 3 from No. 5 in the pre-season ranking. The Capitals’ captain has 28 goals and is challenging for the NHL lead at age 30.

Pre-season No. 6 and impending UFA Steven Stamkos, in the midst of an epic negotiation over his future in Tampa Bay, also took a hit – falling to No. 29. Stamkos, Crosby and Toews are the only three players who have placed in the top 10 all six years of the pre-season poll.

Crosby, Toews, Price, Tavares and Stamkos have been replaced in the top 6 by Kane, 2014-15 scoring champion and Dallas winger Jamie Benn (No. 2), Ottawa defenceman Erik Karlsson (No. 4), Washington goalie Braden Holtby (No. 5) and Dallas centre Tyler Seguin (No. 6).

As for Kane’s defenceman teammate Keith, the 2015 Conn Smythe Trophy winner, he landed at No. 18 after starting the season No. 12. Missing 10 games as the result of a knee injury undoubtedly played a role.

No player’s stock has crashed like Ryan Getzlaf’s. The Anaheim captain has gone from No. 8 to not ranked, a precipitous fall from grace if ever there were one. What more is there to be said about an $8.25-million player with three goals in 43 games?

The yin to Getzlaf’s yang are Washington centre Evgeny Kuznetsov and Calgary winger Johnny (Hockey) Gaudreau, who went from not ranked in the pre-season to No. 13 and No. 15, respectively.

No player’s rise has been as unexpected as Edmonton centre Leon Draisaitl, who went from starting the season in the AHL – scoring a mere two points in six games with Bakersfield – before a call-up to the Oilers. Draisaitl has a stunning 37 points in 40 games while celebrated teammate Connor McDavid has cooled his heels with a shoulder injury. Where pre-season No. 37 McDavid, who had 12 points in 13 games, would have ranked if not for the injury is a matter of conjecture.

Chicago winger Artemi Panarin (No. 25) is the only rookie on the list.

Among those going from not ranked to the top 25 are Chicago goalie Corey Crawford (No. 19), Winnipeg winger Blake Wheeler (No. 22), Vancouver all-time goal leader Daniel Sedin (No. 23) and New Jersey goalie Corey Schneider (No. 24).