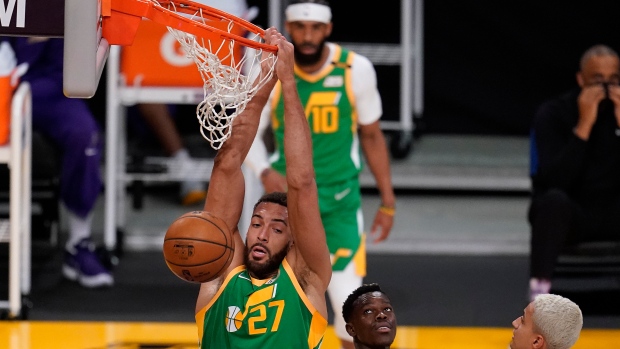 Bojan Bogdanovic scored 19 points as NBA-leading Utah avenged the Lakers' 127-115 overtime victory on Saturday night. The Jazz rested Rudy Gobert, Mike Conley Jr. and Derrick Favours in the first game on the second night of a back-to-back set, but all three returned for the rematch at Staples Center.

“We still have a lot of work to do, but I think we can compete with any team in this league,” Favours said. “I think we’re going to see this team again down the road, so we just wanted to do the things we needed to get a win.”

Talen Horton-Tucker scored a career-high 24 points for the Lakers, who dropped to 7-9 without both of their superstars and 14-16 since Davis went down on Valentine's Day.

“These guys are as good as anyone in the league with the read-drive offence,” Lakers coach Frank Vogel said of the Jazz. “They’re patient. They look for great shots at the rim or great shots at the perimeter. If they don’t have it, they work the possession until they get it. That’s why their record is what it is, and obviously we weren’t good enough tonight.”

Kyle Kuzma scored all of his 17 points in the first three quarters for Los Angeles, and Dennis Schröder had 15 points and six assists. The Lakers have alternated wins and losses for 12 consecutive games since March 28.

Clarkson hit nine of his 14 shots and Ingles went 8 for 11 against the NBA's top defensive team for Utah, which never trailed in its fifth victory in seven games. The Jazz doubled their halftime lead to 20 points in the third quarter with 13 from Ingles, who hit three 3-pointers in that stretch.

“I thought we came out with a good focus at the beginning of the game,” Jazz coach Quin Snyder said. “Any time we play a team and we build a little bit of a lead, we know they’re going to raise their level. That's a good performance for us.”

Lakers: Davis is likely just a few days away from his return, coach Frank Vogel said. The All-NBA big man has missed 30 games with a strained calf. Davis is currently building up his conditioning. Kuzma said Davis had “better play” this week: “It's been a long two, three months.” ... James is doing “light work” on the court, Vogel said, but his return is not imminent. James has missed 16 straight games since spraining his ankle March 20. ... Marc Gasol was available, but he sat out his second straight game after breaking a ligament in his left pinky finger last Thursday.

The Lakers’ 42 points in the first half were their second-fewest of the season. They never led for the second time in their last three home games, following a wire-to-wire loss to Boston last week.

Jazz: At Rockets on Wednesday.

Lakers: At Mavericks on Thursday.