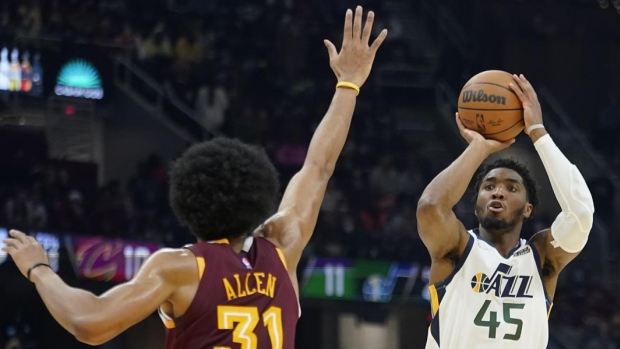 Bojan Bogdanovic added 16 points and Rudy Gay had 15 for Utah, which made 20 3-pointers and gave away a 15-point lead in the fourth.

The Cavs had a chance to win, but Darius Garland missed a 28-footer with 2.9 seconds to go, and Jarrett Allen couldn’t get his tip to drop as Cleveland had its winning streak stopped at four.

Garland scored 31 points, Allen added 17 points and 11 rebounds and rookie Evan Mobley had 14 points and 12 rebounds for the Cavs, who were back at home after beating Dallas, Miami and Washington. It was the first time since 1975 that the Cavs won three straight on the road over teams with winning records.

Kelly Oubre Jr. made six 3s and scored 28 points for Charlotte. The Hornets made a season-high 17 3s.

John Collins led Atlanta with a season-best 31 points and 12 rebounds.

The four Charlotte players held out after being placed in the NBA’s health and safety COVID-19 protocols were leading scorer LaMelo Ball, starting guard Terry Rozier, center Mason Plumlee and forward Jalen McDaniels. They’ll be sidelined for at least 10 days.

Chris Boucher scored 14 points, Scottie Barnes had 11, and Fred VanVleet 10 to help the Raptors win back-to-back games for the first time since a five-game winning streak from Oct. 27 to Nov. 3.

Kentavious Caldwell-Pope scored a season-high 26 points and Bradley Beal had 14 for the Wizards, who couldn’t dig out of a hole after shooting poorly in the first quarter.

Brandon Ingram scored a season-high 40 points for the Pelicans, which was his most since dropping 40 against Brooklyn on Nov. 4, 2019. Jonas Valanciunas finished with 17 points and 10 rebounds for New Orleans.

Houston’s Daniel Theis netted 12 points on 4 of 6 shooting from the field, and Alperen Sengun finished with 10 points.