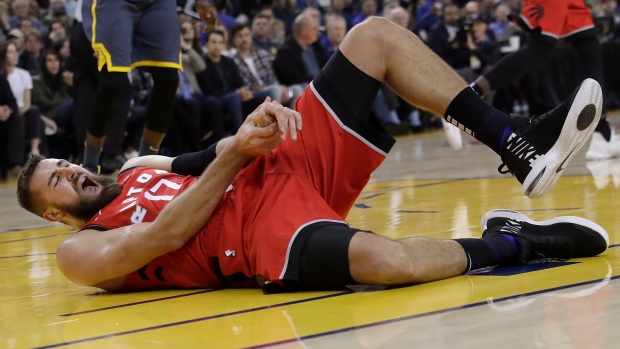 The Toronto Raptors will likely be without the services of Jonas Valanciunas for quite a while, after the centre dislocated his left thumb Wednesday night.

Valanciunas sustained the injury in the second quarter of Toronto's 113-93 road win over the Golden State Warriors on Wednesday, after his thumb was hit by Warriors forward Draymond Green on a play where Valanciunas was posting up Green.

The Raptors big man, who at the time of the injury screamed out in pain, left the game immediately and did not return.

That was not easy to watch. JV is tough as nails, but could hear him screaming in pain from where we're seated at the top of the 100 level. He's gone to the locker room. Have to hope it's not as bad as it looked, but it looked real bad. He's got a history of hand injuries.

Prior to leaving, Valanciunas recorded six points and seven rebounds in nearly eight minutes of action.

Valanciunas, who has made the shift to being primarily a reserve player for the Raptors this season, entered Wednesday's game averaging 13.0 points and 7.2 rebounds.