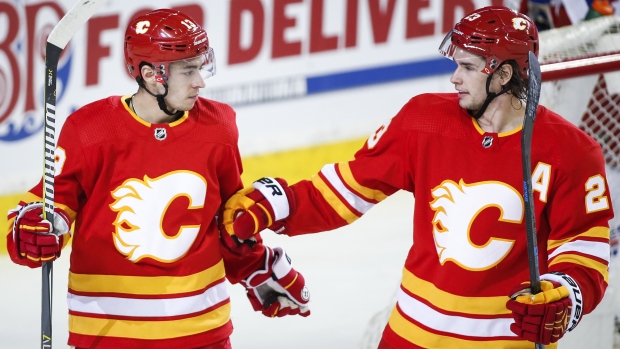 The speedy left-winger tallied the Flames’ lone goal in a 5-1 loss to the Canucks, the final game of a season where they finished 14 points out of a playoff spot.

Beyond the start of a career that would see that 2011 fourth-round pick become a franchise pillar and NHL star, that spring day in 2014 was significant for another reason: it marked the beginning of his friendship with centre Sean Monahan, the team’s sixth overall pick in the previous draft.

“That was the first time I got to meet him,” the 26-year-old Monahan said in an interview with TSN this week.

“The following season, we ended up playing together for about half the year. We became good friends and been linemates for a long time now.”

“I think we were both just younger guys getting our feet wet in the NHL and starting our careers.”

Since that day, the two have more goals than any other duo in the National Hockey League. They’ve combined to find the back of the net 325 times, led the Flames to the playoffs four times, won a series, and made an impact in the community - all while playing in the spotlight of a Canadian hockey market.

“We had great chemistry on the ice and are good buddies off the ice as well,” Gaudreau said. “That makes it easier to play together on the ice.”

“You want your teammates to succeed, whoever they are,” Monahan said.

The two have continued their strong play this season, combining for eight points through the Flames’ first three games and playing a large role in helping Calgary ascend to near the top of the North Division standings early on in the season.

That early success follows a tumultuous season that saw the Flames make a coaching change and play well under new bench boss Geoff Ward before ultimately suffering another early playoff exit, falling to the Dallas Stars in the NHL’s Return To Play in the summer.

The six-game series loss prompted calls for general manager Brad Treliving to blow up the team’s core. Instead, the 27-year-old Gaudreau and Monahan remain faces of the franchise they’ve been a part of for a combined 18 years.

“You just play,” Monahan said, when asked about the intensity of playing in a hockey market.

“People can say whatever they want and talk to you about things but at the end of the day, you play for a team, you’re playing for the guys in the locker room, so it’s easy to block out. You want to be at your best, night in and night out and that’s what’s going to help the team win…at the end of the day, you’ve got to your job when you’re on the ice.”

“A majority of our guys came back from last season and it kind of left a bad taste in our mouth in the playoffs there we lost to Dallas and they went on to the Cup final,” Gaudreau said.

“We knew we were right there. We knew we could compete with the top teams.”

Away from the ice (at least in pre-COVID-19 times), Monahan and Gaudreau spend plenty of time together. They live close to one another in Calgary and often dine with one another on the road. In addition to their love of hockey, they both love dogs. Monahan has a Goldendoodle named Winston and he convinced Gaudreau to get his own companion, who he named Bailey.

“I had a dog and Johnny was hanging out at my house a lot and loved the dog, so he went out and got one that was similar to mine and now they’re good friends, too.”

They also proposed to their partners this off-season, a day apart. Despite that coincidence, they say it wasn’t coordinated.

“It gave us something to chat about while we were stuck in the bubble there.”

Moreso than perhaps any other players of this generation, Flames diehards have witnessed Gaudreau and Monahan grow from wide-eyed teens attending their first NHL development camps to becoming part of the very foundation around which the team is built. They’ve hit milestones and ascended up the franchise record books while handling pressure and answering questions about seasons gone astray.

While coaches and wingers and goalies have come and gone through Calgary, “Monny” and Johnny remain. Mature and armed with long-term extensions, they’re now focused on making the most of a season where they’re facing Canadian teams game in and game out, and (perhaps most importantly) quenching Flames’ fans thirst for postseason success come the spring.

“I think we’re over the fact of wanting to score all the goals and put up big numbers,” Monahan said.

“We want to accomplish something here as a team and we want to be a big part of that. We want to win here in Calgary and this is our time to step up and try to make a difference.”

“We’re just trying to win a Cup and have that lifelong friendship with the guys on your team to win something like that, it’s pretty special,” Gaudreau said.

“We’ve been a part of this organization for a long time and we’ve had some success and we’ve had some tough years, so to be able to have a really good playoff run and try to win a Cup and bring it back to Calgary would be icing on the cake.”