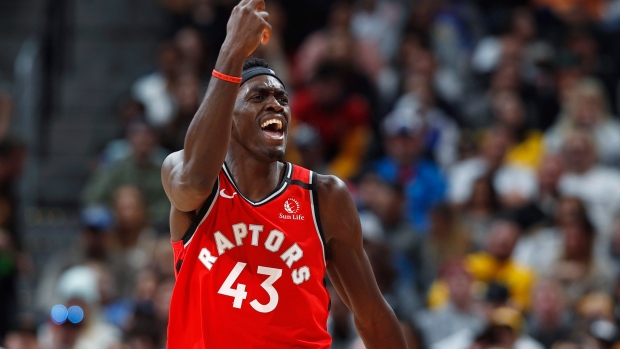 TORONTO – There are a lot of reasons to hope the NBA restart goes according to plan. The most obvious, regardless of which team you root for, is the health and safety of those involved. Then, specifically if you’re a Raptors fan, a few things come to mind.

You want to see what this team is capable of. The defending champs have been on a mission since Kawhi Leonard left for Los Angeles last summer. They’ve defied the odds, overcome injuries, and were 46-18 – good for second in the Eastern Conference – when the season was put on hold in March. Can they finish what they started?

You want Kyle Lowry, arguably the greatest player in franchise history, to have the chance to pad what might be a Hall-of-Fame resume. He’s 34 and has one year left on his contract.

You want the opportunity to watch this core group of guys play at least 12 more games together before three of them – Fred VanVleet, Marc Gasol and Serge Ibaka – become unrestricted free agents in a few months.

But regardless of how many games they win or how far they go, you should want the team’s young stars to get the valuable experience they’ve spent so much time preparing for.

Forwards Pascal Siakam and OG Anunoby were enjoying career seasons when the COVID-19 pandemic hit and threatened to derail the encouraging progress they’ve made.

Siakam inherited the lead role from Leonard, and despite some understandable growing pains along the way he didn’t looked out of place as the No. 1 option in Toronto’s offence. The playoffs are a different beast though – more responsibility, more defensive attention and more pressure.

“I feel like I’ve been getting [more] attention pretty much all season long and it’s something that I’m definitely working on,” the 26-year-old All-Star said on video conference from Fort Myers, FL., where the Raptors are holding individual workouts before heading to Orlando for training camp next week.

“Obviously, the playoffs [are] more specific in terms of preparation and teams are going to be ready with different things. I think I’m just going to take it a day at a time and obviously I know the actions I’m involved in and how teams usually guard me. [I’m] definitely working on those things and making sure I’m ready to adapt to any situation.”

Anunoby’s last post-season experience came in 2018, and he probably doesn’t look back on it fondly. A rookie at the time, he was responsible for guarding LeBron James, who hit the winning jumper over him in Game 3 of what turned out to be a four-game, second-round sweep for Cleveland. Anunoby did an admirable job on James in the series though, and was a standout for the Raptors in the opening round against Washington.

What followed was a rough sophomore campaign, both on and off the court, culminating in an emergency appendectomy on the eve of the playoffs. Anunoby watched Toronto’s championship run from the hospital, and then the bench, without playing a single minute.

“I wasn't able to be out there, so yeah, I wish I could have played, but now I can this year,” the 22-year-old said. “I'll use it as motivation and hopefully play well [and help us] reach all our goals.”

The Raptors will need both Siakam and Anunoby to play at a high level in order for them to reach their goals as a team. They didn’t miss Leonard much during the first 64 games of the regular season, but the question remains: how will they fare in the playoffs, when teams generally tighten their rotation and lean heavily on their best player?

It’s unreasonable to expect any one player to fill that void, but the two young forwards will be crucial in terms of making up a lot of that two-way production.

Anunoby will continue to be tasked with defending the opposition’s best perimeter player. It’s a role he’s thrived in this season, particularly in the weeks leading up to the hiatus, when he was starting to look like the elite stopper Toronto envisioned him blossoming into.

He’ll have his hands full. For the Raptors to make it back to the Finals, where they could run into Leonard or James, they’ll have to go through some notable wing players in the East – a talented list that may include Jayson Tatum, Ben Simmons and Giannis Antetokounmpo.

Meanwhile, the spotlight will be on Siakam. Even if the offence is more balanced than it was a year ago, he’s the guy they’ll turn to when they need a bucket, or two, or three. There will be moments, maybe even games, where he’ll have to carry the scoring load.

Not getting those valuable post-season reps in his new, expanded role would have been disappointing – for the player, the team and their fans. The playoffs represent a chance for Siakam to prove he’s ready for superstardom, or to learn an important lesson about what’s needed for him to take the next step. In either case, he’s embracing the challenge. That approach is exactly why he’s come this far already.

“For me, personally, I just felt like it’s been a really good season and a learning experience for me – just being able to be out there on the floor, seeing different things and adapting,” Siakam said. “For my journey and who I am as a person and as a basketball player, that’s something that’s always kind of excited me and helped me reach new heights, and I’m excited about the challenge.

The four-month hiatus has been a double-edged sword for Siakam. One on hand, he feels refreshed after having a rare opportunity to rest in the middle of a long and demanding season. On the other, he’s not used to being away from the court for lengthy periods of time.

With gyms and parks closed in Toronto, where he spent the entirety of the pandemic, Siakam went a couple months without shooting a basketball. The team got him a portable hoop to shoot on outside, but the Canadian spring weather rarely cooperated. He wasn’t able to get back on the court until the Raptors got league and government approval to re-open their practice facility for individual use in May.

With the NBA ramping up again and, hopefully, resuming the season at the end of the month – the Raptors’ first game back comes against the Lakers on Aug. 1 – Siakam and Anunoby have some catching up to do, but they’re certainly not alone in that regard.

Toronto’s players will have the next few weeks, and even the eight “seeding games”, to get their conditioning back and gear up for the playoffs. If the plan goes off without a hitch – and it’s a big ‘if’, given all of the uncertainty at play – the Raptors should benefit from the experience.

“I think the whole team's excited to get back and play,” Anunoby said. “We all love doing this, so the chance to compete, any time we get a chance, we want to play. We're just ready for the rest of the regular season [and the] playoffs.”​