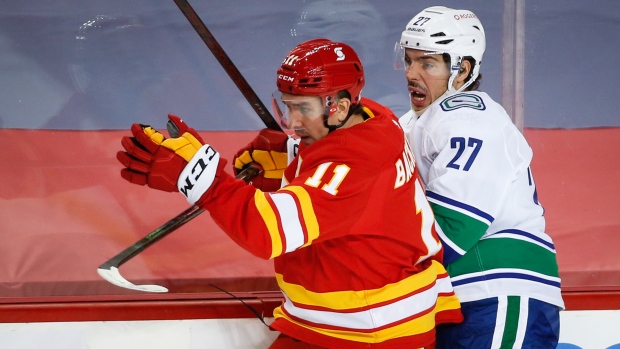 Transaction update: Brogan Rafferty has been recalled from the taxi squad. Travis Hamonic has been placed on IR.

Hamonic, 30, left the ice during Wednesday's game against the Montreal Canadiens and was seen doubled over on the bench speaking with the Canucks' trainers. The 11-year-veteran is in his first year with the Canucks and has recorded two assists in five games this season. In 642 career games, Hamonic has scored 37 goals and added 153 assists.

Brogan Rafferty, 25, has been recalled from the taxi squad and will replace Hamonic in the lineup Thursday in a rematch against the Canadiens.

Jalen Chatfield left Thursday's game with five minutes remaining in the first period with an upper-body injury. Chatfield, 24, made his NHL debut in Wednesday's victory over the Habs.