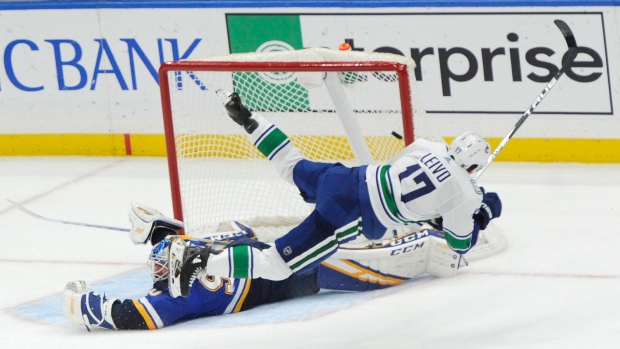 ST. LOUIS — Thatcher Demko is making the most of his time in the Canucks' starting lineup.

Demko made 34 saves in regulation and overtime and stopped all six shots in a shootout to help Vancouver to a 4-3 win over the St. Louis Blues on Thursday.

Vancouver won its fourth in a row — its longest streak since winning four straight from March 25-31, 2018.

Josh Leivo scored the lone shootout goal, which came at the end of the sixth round.

Bo Horvat, J.T. Miller and Micheal Ferland scored for the Canucks, who won for the first time on the road in three tries this season.

Demko is replacing regular starter Jacob Markstrom, who has missed the last two games due to a family emergency.

The San Diego-born Demko stopped 26 shots in a 5-1 win over Detroit on Tuesday in his first start of the season.

He made a pair of impressive stops in the shootout, including pad saves on Brayden Schenn and Alexander Steen.

"I think he's a composed guy," Vancouver coach Travis Green said of Demko. "He's ultra-competitive. That's a hell of a hockey team over there and he had to make some tough saves."

Leivo lifted a shot over Jordan Binnington after the first 11 shooters came up empty.

Hovath jammed the puck in off a scramble in front of the net to tie the game at 3-3 with 7:55 left in the third period.

"It's feeling good right now, guys are confident," Horvat said. "But at the same time, it should push us to win more."

Tarasenko and Pietrangelo scored 47 seconds apart in the second period to give the Blues a 3-1 lead.

Pietrangelo ripped a one-timer from the top of the faceoff circle off a pass from Oskar Sundqvist at 2:47. Tarasenko then jumped on the rebound of a shot from Jaden Schwartz for his second goal in as many games.

Ferland tied the game 1-1 on the rebound of shot by Brandon Sutter early in the second period. Miller cut the deficit to 3-2 with his third goal in two games.

The Blues have points in six of seven games this season but have blown two-goal leads in all three extra time losses.

"We can do a better job of closing teams out," Pietrangelo said. "Once we start closing out teams, we can be pushing things in the right direction."

NOTES: The Blues visited the White House on Tuesday. Since 2007, teams are 7-2-3 in their first game after visiting the White House. ... St. Louis C Brayden Schenn had a five-game goal streak snapped. ... Blues RW Robert Thomas returned to the lineup after missing the past five games with an upper-body injury that was not related to his left wrist injury that required off-season surgery. ... St. Louis Cardinals pitcher Adam Wainwright and catcher Yadier Molina were in attendance, two days after they were eliminated from the playoffs by the Washington Nationals.

Canucks: Face New Jersey on Saturday in the second game of a four-game trip.