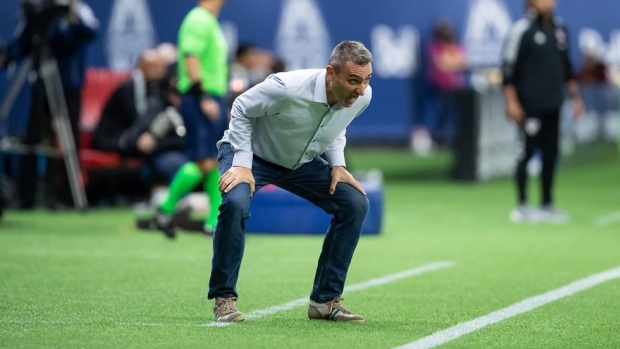 He saw how the Major League Soccer team was rallying behind interim head coach Vanni Sartini and realized he, too, was leaning toward keeping the exuberant Italian in the role.

Continuing to interview other candidates wouldn't be fair, Schuster said Tuesday after the Whitecaps officially named Sartini as the new bench boss.

“Vanni is not only getting the job because he was just here and everyone’s excited at this moment about how the season ended," Schuster said. “Vanni has got this job because at the end of the whole process, he was also the strongest candidate.”

Sartini, the 16th full-time head coach in the club's 47-year history, has signed a two-year contract through the 2023 season.

Vancouver fell to the bottom of the Western Conference in early August following an eight-game winless skid, and lost 4-3 to Canadian Premier League side Pacific FC in the first round of the Canadian Championship on Aug. 26.

The team finished the regular season sixth in the Western Conference with a 12-9-13 record — including a 7-2-5 stretch under Sartini — and made the playoffs for the first time in four years before losing to Sporting Kansas City 3-1 in a first-round matchup.

The post-season loss left Sartini "moody" for about a day, until he went for a walk on Vancouver's picturesque seawall and was stopped by a number of fans thanking him for his work.

Now he's energized and looking forward to the club's future.

“I’m very happy. That’s pretty simple," he said. "I’m honoured, also, that the club decided to continue with me after this crazy but very beautiful three months."

Sartini made liberal use of the club's talents this season, tapping a different starting lineup for each of the 14 games he coached. Overall, he used 22 different players in the starting 11.

"The team, the players really bought into his philosophy," said defender Jake Nerwinski. "He built a culture in such a short amount of time that really brought this team closer together."

Sartini quickly caught attention for his demeanour during games. Dressed in jeans and a button-up shirt, he paced the sidelines, gesturing wildly as he shouted to players in multiple languages (he's fluent in Italian, English and Spanish and is learning Japanese). When the Whitecaps scored, Sartini would leap and cheer as if he'd scored the goal himself.

"He brings a ton of energy and enthusiasm and charisma. And he’s somebody that is a real leader and you want to do what he says. He makes you love the game just with how much he loves it," said midfielder Russell Teibert.

"Maybe it’s the socks, maybe it’s the jeans, the game day outfits, the speeches. I’m not sure. I think his energy is just contagious."

Before joining the 'Caps, Sartini worked as a coach educator for the Italian Football Federation and the U.S. Soccer Federation, and coached at several different clubs in Italy.

He came to Vancouver in 2019 as Dos Santos's assistant coach and spent two seasons with the first team before being named the club's "director of methodology" and taking over coaching the U-23 team in 2020.

Schuster said Sartini will continue to act as the director of methodology going forward, and the club will discuss over the next few weeks how to support him in that role and grow the academy.

"I know that removing the label of interim probably means that I have more responsibility, but I welcome the responsibility," Sartini said. "I will give 1,000 per cent.”