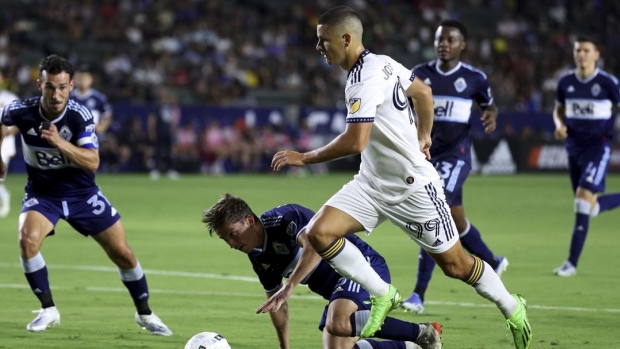 VANCOUVER — Playing the Colorado Rapids in a quick turnaround Wednesday night at BC Place could be the best medicine for the Vancouver Whitecaps after they looked anemic losing their last match.

Head coach Vanni Sartini called the Whitecaps’ 5-2 road loss to the L.A. Galaxy on Saturday “a debacle” but expects a “bounce back” against Colorado as his team continues to hunt for a Major League Soccer playoff spot.

“To be honest, the worst thing in L.A. was they didn’t beat us because of a tactical masterpiece or we didn’t know what to do,” Sartini said after training Tuesday. “We just made a lot of individual mistakes. When a lot of players make individual mistakes, there’s something we have to fix collectively.

“We didn’t have too much time to prepare (for Colorado) but we don’t have to make major changes in terms of tactics. We know what our strengths are. We have to work on our strengths from minute one.”

The Whitecaps (8-11-6) and Rapids (8-9-7) are in a group of six teams hovering around the playoff line in Major League Soccer's Western Conference. Nashville holds the seventh and final playoff spot with 33 points. The Galaxy also have 33 points but are ranked sixth with two more wins.

Just three points separate eighth-place Portland from 11th-place Vancouver. A win against Colorado would vault the Whitecaps past Nashville.

The Rapids come to Vancouver on a roll, having just one loss in their last seven matches (3-1-3). The Rapids have struggled on the road with a 1-7-3 record. A 5-4 win in New York against the Red Bulls on Aug. 2 ended a 10-game road winless streak.

Striker Diego Rubio leads the Rapids with 12 goals and six assists. His goal on a penalty kick in a 1-1 draw with Columbus Saturday extended his scoring streak to eight consecutive games (five goals, five assists.)

“They are a very aggressive team and a team that is really hard to break down physically,” said Sartini. “We need to be very intelligent in our movement and move a lot because they play a kind of very aggressive, almost man-to-man defence.

“The more we move, the more space we have and the more chances we’ll have to break them down.”

Defender Ranko Veselinovic said the Whitecaps can’t afford to fall behind early. Vancouver has allowed the first goal in six of its last seven games. Three of the goals have come with less than seven minutes gone. The Whitecaps are 1-3-2 in those games.

“The last three games we started slow, we were bad in the first half,” said Veselinovic. “We need to be better prepared to start on the front foot and try to score first.”

The Whitecaps are in a stretch where they play three games in eight days, two on the road. After Wednesday’s match Vancouver faces Real Salt Lake at Rio Tinto Stadium Saturday night.

Considering the tight playoff race, a positive result against the Rapids would make the trip to Salt Lake easier.

“It would be enormous for us to go to Salt Lake with our head concentrated on grabbing something instead of being in emergency mode because we need the result,” said Sartini.

INJURY REPORT: Striker Brian White (ribs) and forward Deiber Caicedo (out for the season following meniscus surgery on right knee) are out for Vancouver.

BACK IN THE FOLD: Striker Lucas Cavallini returns after missing the last game for yellow card. Cavallini who leads the team with eight goals, has scored in his last two MLS matches and is tied for third most game-winning goals in the league with four.

SEEING YELLOW: Vancouver forward Cristian Dajome and Colorado defender Lucas Esteves are out with yellow card suspensions. The MLS Disciplinary Committee also found Dajome guilty of failure to leave the field in a timely manner in the 79th minute against the Galaxy and he has been fined an undisclosed amount for his actions.

This report by The Canadian Press was first published Aug. 16, 2022