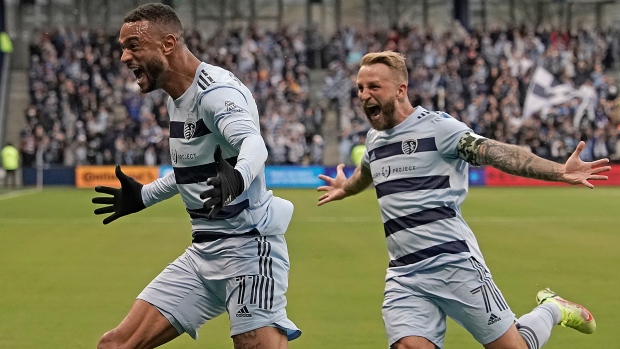 KANSAS CITY, Kan. — It isn't the storybook ending the Vancouver Whitecaps had hoped for, but a first-round loss in the Major League Soccer playoffs has given the club a renewed sense of hope about the future.

The 'Caps saw their wild season come to an end with a 3-1 loss to Sporting Kansas City on Saturday.

“I’m a little bit disappointed for the result but I think that we put everything in it and we don’t have any regrets, to be honest," said interim head coach Vanni Sartini.

“We showed to everyone that we didn’t come here because of a fluke. That’s our spot. Hopefully for the organization, it’s a starting point for next year.”

Defender Graham Zusi led Sporting with a goal and an assist, while Nicolas Isimat-Mirin and Khiry Shelton also scored for the home side. Daniel Salloi recorded two assists.

Cristian Dajome had the lone goal for the 'Caps, converting a penalty kick in the 39th minute.

The Whitecaps were making their first playoff appearance in four years after finishing the 2021 regular season sixth in the Western Conference with a 12-9-13 record.

Sporting ended the campaign third in the West with a 17-10-7 record and is in the post-season for the 10th time in 11 seasons. The club will face either the No. 2 Seattle Sounders or No. 7 Real Salt Lake in the second round of the playoffs on Nov. 28.

Saturday's loss follows a roller-coaster season that began with the Whitecaps based out of Sandy, Utah, due to pandemic border restrictions.

The club struggled early and fell to the bottom of the Western Conference at the beginning of August. Later that month, 'Caps head coach Marc Dos Santos was fired and Sartini, the club's director of methodology, took over the role on an interim basis.

Vancouver went on a 10-2-10 run to close out the season and clinched a playoff spot with a 1-1 draw against the Sounders on Nov. 7.

Through it all, the Whitecaps fought and showed resiliency, said captain Russell Teibert.

“It makes you really proud to be on a team like that, where every guy is pushing to the final whistle and nobody’s giving up, nobody’s putting their head down," said the veteran midfielder. "We all felt a part of something this year. And we built something that’s going to carry over into next season.”

The 'Caps got a glimmer of hope in the 86th minute Saturday when striker Lucas Cavallini fired a shot into the back of the Kansas City net from in tight, only to see the offside flag raised moments later.

Vancouver nearly cut its deficit to a single goal in the 69th minute, too, as striker Brian White sent a header down toward the SKC goal, but Melia batted the ball away with his fingertips just in time.

"Even if we lost today even in a playoff game, we showed we are a playoff team because we put a fight on in a tough stadium until minute 93 and they were scared at the end of our coming back," Sartini said.

Zusi gave the home team a two-goal cushion in the 58th minute. He unleashed a rocket from outside the top of the box, sending the ball curling as it sailed into the back of the Vancouver net.

It was the veteran defender's first MLS playoff goal and came in his 19th post-season appearance.

Down 2-1 at the half, the 'Caps talked in the locker room about how they still had a chance to grind out a win, Crepeau said.

“There was a belief we could pull back a result because we did it once — well, more than once in the past — so there was a belief of doing it," said the 'keeper. "But we were not able to pull it out today.”

Sporting regained the lead in first-half injury time with a goal from Isimat-Mirin.

Johnny Russell sent a ball swinging into the penalty area from a corner kick and the 'Caps weren't able to send the ball out of harm's way. Instead, it bounced around inside the six-yard box before Isimat-Mirin kneed it in at the 45+3 mark.

“I got a touch on it and then it’s coming back," Crepeau said of the goal. "We don’t clear the ball in our zone and then it bounces in the six (yard box) and it’s a free tap in.”

Vancouver levelled the score after SKC's Luis Martins was called for handball in the box. Dajome stepped up to take the kick, looking calm and patient as he waited for his moment, then sending a low ball rolling into the bottom left corner of the net in the 39th minute.

The Colombian was second in scoring for the 'Caps during the regular season, recording 10 goals and five assists in 33 appearances.

Kansas City got on the board in the 17th minute when Zusi sent a cross sailing into Shelton in the box and the American blasted a right-footed shot past the outstretched fingers of the diving Crepeau for his first playoff goal.

“Today we weren’t perfect," Sartini said after the game. "We did some mistakes but the effort and the intensity was good and Kansas City didn’t overwhelm us.”

NOTES: A crowd of 19,817 people took in the game at Children's Mercy Park. … The 'Caps were eliminated from the 2017 conference semifinals by the Sounders. … Defender Jake Nerwinski is the only player who started both Saturday's game and the Whitecaps' previous playoff appearance.