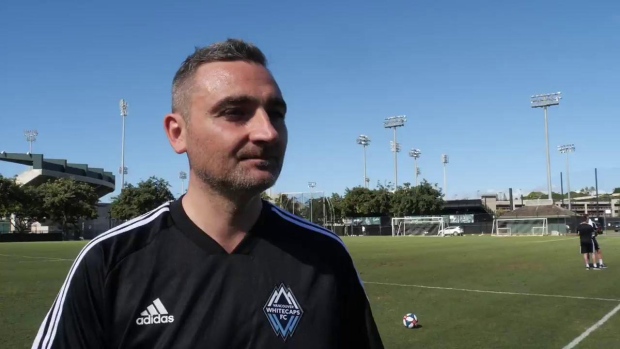 VANCOUVER — After tasting the playoffs last season, the Vancouver Whitecaps are hungrier than ever.

The club finished the 2021 Major League Soccer campaign with a 12-9-13 record, good for sixth in the West, and played its first post-season game in four years.

Vancouver lost the first-round matchup 3-1 to Sporting Kansas City, and the experience is fuelling the 'Caps as they begin training for the 2022 season this week.

“We wanted more. We were happy we made the playoffs but we expected more from this group and we expect more this year," defender Jake Nerwinksi said Monday.

The 2021 campaign was full of change.

Pandemic border restrictions forced the club to start its season based out of Sandy, Utah, away from familiar training facilities, friends and families, and without Whitecaps fans in the stands. A slump saw the dismissal of head coach Marc Dos Santos in late August, and Vanni Sartini installed in his place on an interim basis. New impact players like striker Brian White and defender Florian Jungwirth were brought in midway through the year, transforming the club's play and propelling it up the standings.

This season is set to be much more stable The team kicked off training in Vancouver Monday and plans to begin the year based out of its home stadium, B.C. Place. Sartini has signed a two-year contract through 2023, and the talent acquired last year is set to play a full campaign.

Having some continuity this season will be "huge," Nerwinski said.

"I’ve seen a lot of turnover in my five years here," he said. "So it’s great that not that many guys have left, a lot of guys are staying, we’ve added a few good pieces, I think that’s important to what we’re building here.”

Attacking midfielder Ryan Gauld was one of the 'Caps biggest midseason additions. Signed at the end of July, the 25-year-old Scot quickly developed a reputation as a crafty playmaker and finished the year with four goals and six assists in 18 appearances.

He, too, thinks returning the bulk of the roster will have an affect on the club.

“The continuity of having almost the entire same group together helps," Gauld said. "It helps knowing how each other play and we’ve already bonded on the pitch and off the pitch. So yeah, it’s definitely a big help."

Vancouver has parted ways with others, however, including veteran Andy Rose. The 31-year-old midfielder/defender announced last week that he's retiring from playing and is rumoured to be taking a coaching position with the Seattle Sounders.

The 'Caps also opted not to pick up a purchase option for Angolan defender Bruno Gaspar following his one-year loan from Portugal's Sporting CP.

Another departure currently in the works is the transfer of Portuguese midfielder Janio Bikel, who's currently in Europe while the Whitecaps explore loan or transfer options. Sporting director Axel Schuster said on Monday that he expects a deal to be completed early this week.

To help fill the holes, Vancouver added former Los Angeles FC defender Tristan Blackmon last month via a trade with expansion side Charlotte FC. It will also get some familiar faces back on the pitch this week, including Brazilian midfielder Caio Alexandre, who was sidelined by a broken foot in mid-August.

Striker Theo Bair also returns to the Whitecaps after spending much of last season on loan in Norway. The 22-year-old Ottawa native said he wanted to go out on loan to get more playing minutes, but he's happy to return to Vancouver.

Bair kept tabs on his team while in Norway, even staying up until the early morning when the 'Caps clinched a playoff spot so he could congratulate his friends on FaceTime.

"I was staying up until 3 a.m. and watching goals go in and cheering and stuff," he said. "It was really amazing to watch and I was so happy for the boys and so proud of them."

There's a new feeling around the team this season, Bair added.

"I can tell there’s a completely different energy with the team since the last time I was here and it’s exciting to see the boys happy and looking forward to a new season," he said.

How that energy will translate on the field remains to be seen.

MLS standings can swing wildly from one season to the next, noted Sartini, but the 'Caps head coach thinks his team has confidence heading into a new campaign.

"I think the objective is to keep try and improving and keep getting better and week by week, and get as many points as possible," he said.

Sartini's players were more direct in their goal — Nerwinski and Gauld both want to see the Whitecaps finish high enough in the standings that the team hosts a playoff contest in 2022.

“We made it to the playoffs last year, we need to be there again this year and hopefully take it a step further," Gauld said. "We’d love to play a home game in the playoffs but that’s a long way away. We can only think of starting the season strong and taking it game by game as it comes."