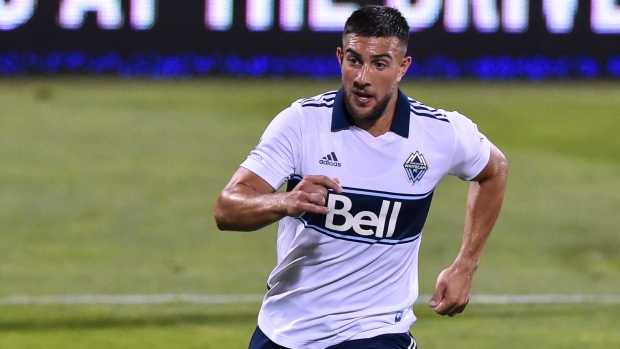 Vancouver Whitecaps striker Lucas Cavallini knew when he saw the ball coming across the box on Saturday night that he simply had to smash it into the Toronto FC net.

Cavallini and the 'Caps have been weathering an offensive drought and went into the all-Canadian match up on a three-game losing skid where they failed to score a single goal.

That changed in the 17th minute of Saturday's game when the 27-year-old Toronto-born attacker headed the ball in past a diving Quinten Westberg.

"It was just a sense of relief," said Cavallini, who signed with the 'Caps in the off-season following a productive career for Mexican side Club Puebla. "But hopefully it's just the first of many."

The win awards Vancouver a much-needed three points in the round-robin portion of this year's Canadian Championship. Toronto (5-2-3) bested the 'Caps in the first two meetings of the series last month.

Still, Whitecaps coach Marc Dos Santos said there are still a number of areas where he wants his group to improve.

Michael Baldisimo and Jake Nerwinski also had goals for the Whitecaps, while Jonathan Osorio and Alejandro Pozuelo found the back of the net for TFC.

Despite the final score, Toronto dominated play throughout much of the match, outshooting the Whitecaps 22-7 (9-3 on target).

Vancouver's Thomas Hasal stopped seven chances, including a massive shot from Pablo Piatti in the final minutes of the first half that forced the 20-year-old 'keeper to make a diving finger-tip save. TFC's Westberg did not register a save.

There were no anthems ahead of the game, but players from both teams gathered behind a banner reading "Enough is Enough" in a bid to show that the clubs stand opposed to systemic racism. Players and officials alike also knelt on the field before kickoff, with Vancouver's Theo Bair and Derek Cornelius each raising their fists.

The stands at BC Place remained largely empty for the match, with COVID-19 restrictions keeping fans at home. Crowd noise was piped in over the sound system, including songs usually belted out by Whitecaps' supporters clubs.

Despite their absence, supporters banners remained in the stands at BC Place. "Be kind, be calm, screw it … win!" read one, a playful nod to the infamous words of B.C.'s chief medical officer, Dr. Bonnie Henry, who told the province to "be kind, be calm and be safe" in the early days of the pandemic.

The empty stands temporarily confused Nerwinski after he scored the game-winning goal in the 77th minute. The 'Caps defender ran to the corner where there would normally be a throng of cheering fans.

"I was like 'Why am I running to the corner? There's no fans.' But I just didn't really know what to do," he told reporters after the game.

The game simply isn't the same without the energy that a live crowd brings, Dos Santos said.

"It's good for TV, it's good for a guy who has a beer in front of his couch and watches the game," the coach said. "(But) we're in a different world, a different sport. It's still called soccer but it's very different."

Toronto FC will be back in action on Wednesday when they host the Montreal Impact. The Whitecaps don't play again until Sept. 13, when Montreal visits BC Place.

NOTES: Toronto FC was without captain Michael Bradley, who suffered a knee sprain on Tuesday and is expected to be out for several weeks. ... Baldisimo's goal was his first ever in MLS action. He celebrated with a back handspring before he was mobbed by his teammates. ... The game was the first live sporting event to be held in Vancouver since the Canucks beat the New York Islanders 5-4 in a shootout on March 10.

This report by The Canadian Press was first published Sept. 5, 2020.