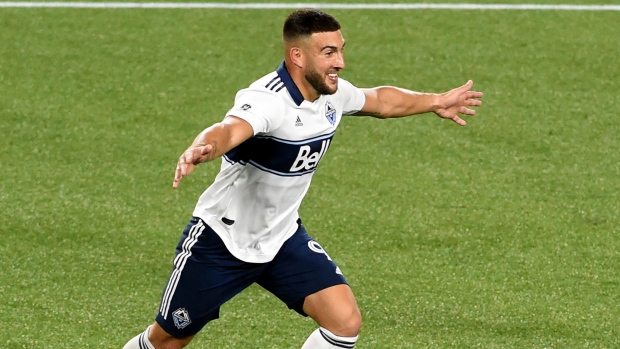 Heading into another tough game against Los Angeles FC on Wednesday, he wanted to remind his team that even the "world's greatest" got beat up sometimes.

“In life, you need to be strong," Dos Santos said on a video call Tuesday. "We got punched a lot in L.A. but we’re going to try to punch back here in our game tomorrow."

Despite the result, Dos Santos said the Whitecaps don't have an inferiority complex heading into Wednesday's rematch at their temporary home in Portland, Ore. Instead, the team is focused on what it can do differently against L.A.

They know LAFC moves the ball well and is good at getting between lines, so Vancouver will look to reduce the space available, Dos Santos said.

“When you back off too much against LAFC, it becomes dangerous," he said. "You have to make sure you believe and you press in the right moments and you’re aggressive as a team. And we have to do that. It’s the only chance we have of getting the full three points.”

The Whitecaps have been outscored 12-2 in their last three meetings with LAFC, something that Vancouver striker Fredy Montero credits to how L.A. controls the game.

The 'Caps will look to change that on Wednesday, Montero said.

“We’re going to make them feel uncomfortable, take them away from their game,” he said, noting that the result may not be beautiful soccer. "We don’t expect to be dominating. But on the 50-50 balls, we are hoping to win most of those.”

L.A. is riding a two-game win streak, but is without some key pieces, including Diego Rossi, who leads Major League Soccer with 12 goals this season. The Uruguayan striker is one of four LAFC players currently away with their national teams.

The Whitecaps are missing just one player — Jasser Khmiri (Tunisia) — to international duty, and Dos Santos should have amble options when it comes to fielding a starting 11.

The 'Caps are also looking to build on Saturday's win over Real Salt Lake. Vancouver conceded the first goal but came from behind to snatch a 2-1 victory.

“That big win against RSL is massive in the standings as well as in the team spirit," said 'Caps midfielder Ryan Raposo.

Heading into Wednesday's game, the Whitecaps sit in 10th spot, a single point out of a playoff berth. LAFC is in fourth with 24 points.

The entire Vancouver group knows how crucial every game is now, especially because many of them are against tough clubs like L.A., Dos Santos said.

“All the guys are very aware of the opportunity we have in front of us," he said. "We know it’s going to be challenging, the last six games of the schedule. … But we want to punch back. We want to be there. We want to fight until the end.”

MISSING MARK: LAFC could be without Mark-Anthony Kaye on Wednesday. The Canadian midfielder had to be helped off the field after suffering an apparent leg injury against Seattle on Sunday.

LEAGUE HONOURS: L.A.'s Danny Musovski was last week's MLS player of the week. Several members of LAFC and the 'Caps were also named to the league's team of the week, including Vancouver defender Jake Nerwinski.

CREPEAU COMING ALONG: Whitecaps 'keeper Maxime Crepeau has started individual training after suffering a fractured thumb in July. Dos Santos said the goalie is still about 10 days away from training with his teammates and whether he plays again this season remains unclear.

This report by The Canadian Press was first published Oct. 13, 2020.