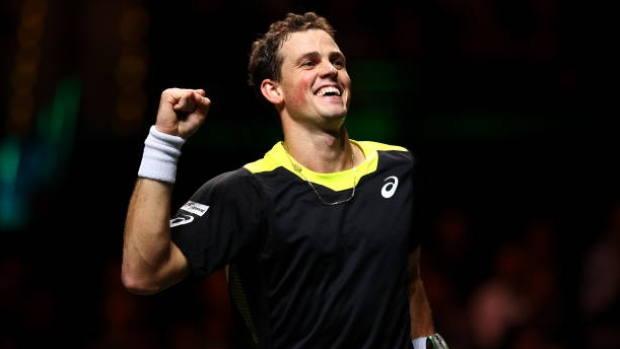 The unseeded Pospisil continued his strong month with a 6-4, 6-3 win over top-seeded Daniil Medvedev of Russia in the first round of the ABN AMRO World Tennis Tournament on Wednesday.

The 104th-ranked Pospisil was coming off a run to the final at the Open Sud de France, where he posted upset wins over Aljaz Bedene, compatriot Denis Shapovalov, Richard Gasquet and David Goffin before falling to Gael Monfils.

The win over Medvedev, ranked fifth in the world, was Pospisil's biggest upset of the year. Medvedev won four tournaments last year and reached the final of the U.S. Open.

"It doesn't happen every day that you can beat a player of Daniil's calibre," said Pospisil. "You always believe in yourself and you know you can do it, especially if you have done it in the past, which I have.

"I came in with a pretty precise game plan. I knew exactly what I wanted to do, but execution is another thing. I was also the big underdog, so I was a bit relaxed and confident, which is a good combo to have when you are going into a match."

It marks the second week in a row Pospisil has eliminated a top-10 opponent — Goffin was No. 10. Pospisil is now 7-28 in his career against top-10 players.

Pospisil, from Vancouver, saved five of six break points and converted on three of five break-point opportunities against Medvedev. He'll face world No. 39 Filip Krajinovic of Serbia in the second round of the ATP Tour 500 indoor hardcourt event on Thursday.

The Canadian's ranking plummeted after he missed the first six months of the 2019 season to recover from back surgery. He posted solid results upon his return and helped anchor the Canadian team at the Davis Cup Finals last fall.

Pospisil, who cracked the top 25 in 2014, can use his protected ranking for tournament entries through Miami next month.

Auger-Aliassime called it his best match this year.

"Today from start to finish, outside of one game on my serve, it was almost perfect," he said. "I was able to pressure him from the return, from serve. I stayed really calm, really composed so I can for sure be really happy with myself and how I played."

Auger-Aliassime advances to the quarterfinals, where he'll face the winner of a match between No. 2 seed Stefanos Tsitsipas of Greece and Slovenia's Bedene.