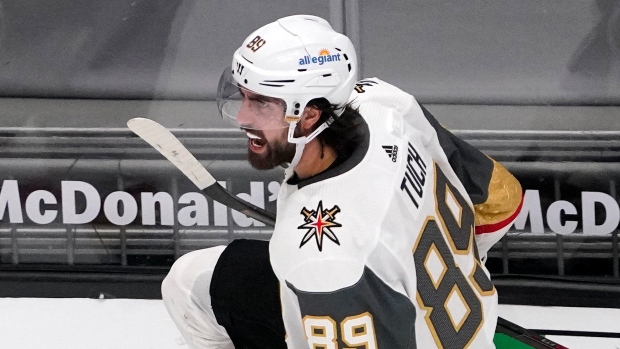 LOS ANGELES — The Vegas Golden Knights have managed to keep winning lately without goals from Max Pacioretty and Mark Stone.

With those two playing key roles in a comeback win against the Los Angeles Kings on Monday night, it might be the kickstart Vegas needs with the playoffs around the corner.

Pacioretty scored his 300th career goal, Stone had a goal and an assist, and the Golden Knights beat the Kings 4-2.

“If we want to sustain streaks of wins, the guys who are playing 18, 20 minutes a night have to produce,” Stone said.

Austin Wagner and Anze Kopitar scored for the Kings, who have lost five of seven. Cal Petersen had 37 saves.

Stone tied it up with a short-handed goal on a breakaway with 27 seconds to go in the period, his first in 11 games.

“We were obviously in the box there for Stoney’s goal, but late in a period and on ice like that, it was really impressive to see him not only get a breakaway but make a really good move under pressure," Pacioretty said.

The danger had been coming for Los Angeles, as Chandler Stephenson had put his shot over the net on a short-handed breakaway earlier in the power play.

“We got sloppy, we got careless, and if the power play isn’t scoring, it should at least gain you a little momentum and it did none of those things tonight," Kings coach Todd McLellan said. “All it did was give back momentum. I thought that was the turning point.”

Tuch came out of his own end to lead an odd-man rush and beat Petersen to the near side with a wrist shot that put Vegas ahead 3-2 at 4:35 of the third. Tuch scored for the first time in 15 games.

Pacioretty scored on the power play at 8:22 to cap the scoring and become the 25th active player with 300 goals. He leads the Golden Knights with 20 goals, but has just two over the past nine games.

“Again, they were carrying that weight of not scoring in a while or regularly lately around pretty having, so I would say all three of those goals were key goals for us,” Vegas coach Pete DeBoer said.

The Kings went ahead at 9:41 of the first when Wagner shot between Lehner’s legs on a breakaway.

Kopitar extended the lead to 2-0 at 8:57 of the second. Dustin Brown made a cheeky pass from behind Lehner’s net to set up Kopitar with a one-timer for his ninth goal. Brown has one goal and three assists during a four-game point streak.

Alex Iafallo had the secondary assist after signing a four-year contract extension worth $16 million earlier in the day.

“I’ve said this numerous times, it’s the best shot I’ve every played with," Stone said. "Probably the best goal scorer I’m ever gonna play with. I don’t know if there’s five guys in the league that shoot it harder than him, and he has precision. You see it on that goal.”

Ryan Reaves and Keegan Kolesar did not play after sustaining undisclosed injures in the Golden Knights’ 1-0 win over Arizona on Sunday. Neither player travelled with the team to Los Angeles, coach Pete DeBoer said, and Reaves was placed on injured reserve Monday.

The Golden Knights had 11 forwards and seven defenceman in the lineup because of the injuries to Reaves and Kolesar, but defenceman Dylan Coghlan played as a winger on the fourth line.

Scoring the opening goal has been trying for the Kings, but taking a lead out of the first period has been even harder. Los Angeles led at the first intermission for the 10th time this season, tied with Florida and Buffalo. Only Ottawa and Nashville, with nine games where they led after 20 minutes, are worse.

The Golden Knights and Kings will play again in Los Angeles on Wednesday.